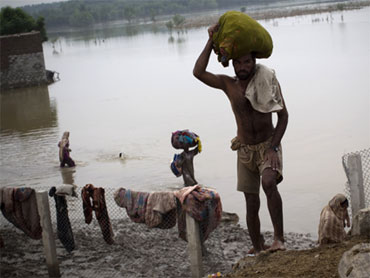 U.S. military personnel waiting to fly Chinooks to stranded communities in the upper reaches of the hard-hit Swat Valley were frustrated by the storms, which dumped more rain on a region where many thousands are living in tents or crammed into public buildings.

Over the last week, floods triggered by monsoon rains have spread from the northwest down Pakistan, killing around 1,500 people. They were faster and more destructive in the northwest, where waters were receding Friday. The floods were moving south along the River Indus, causing less damage and death but inundating hundreds of villages nevertheless.

Some 30,000 Pakistani soldiers are rebuilding bridges, delivering food and setting up relief camps in the northwest, which is the main battleground in the fight against al Qaeda and the Taliban. Foreign countries and the United Nations have donated millions of dollars.

The United Nations said the disaster was "on a par" with the 2005 Kashmir earthquake which killed about 73,000 people in terms of the numbers of people needing assistance and damage to infrastructure.

In a televised address to the nation, Prime Minister Raza Yousuf Gilani said it was the worst flooding in Pakistan's 63-year history.

Nadim Ahmed, the head of the National Disaster Management Authority, said 12 million people had so far been affected by the floods and 650,000 houses destroyed over some 50,965 square miles, making it a bigger - but far less deadly - disaster than the 2005 Kashmir earthquake.

Ahmed did not say what he meant by affected, though the figure presumably includes those who may have experiencing only minor floods. The United Nations earlier said that more than 4 million people had been affected, but normally bases its figures on government data. Officials from the world body were not immediately available for comment on the updated estimate Friday.

Also helping out in the relief effort are Islamist charities, including the Falah-e-Insaniat Foundation, which Western officials believe is linked to Lashkar-e-Taiba, the group blamed for the 2008 Mumbai attacks. Foundation head Hafiz Abdur Rauf said the assistance of the U.S. Army was welcome.

"This is a difficult situation for us. Every helping hand and donation is welcome," he said, adding that his group is running 12 medical facilities and providing cooked food for 100,000 people every day. The foundation helped out after the Kashmir earthquake under a different name.

The government has come under criticism for not doing enough, especially since President Asif Ali Zardari chose to go ahead with a trip to Europe at the height of the crisis.

In the Sukkur area of Sindh in southern Pakistan, 70 villages had been flooded over the last 24 hours, the navy said.

"Floods killed our people, they have ruined our homes and even washed away the graves of our loved ones. Yet we are here without help from the government," said Mai Sahat, a 35-year-old women looking over a flooded landscape where her village used to be.

Saleh Farooqi, head of the Provincial Disaster Management Authority in Sindh, said authorities had evacuated about 200,000 people from areas where floodwaters could hit, but many more were still living in the danger zone.

"About 500,000 people living near the Indus River do not realize the gravity of the situation, and they do not know how fast the water is rushing to their areas," he said.

All helicopters currently stationed in the northwest were grounded because of poor weather, said Amal Masud, a spokeswoman for the National Disaster Management Authority.

About 85 U.S. military personnel are taking part in the relief activities along with six helicopters that were flown over from Afghanistan, where some 100,000 American troops are based battling the Taliban.

Specialist Joseph James usually flies Chinooks on combat missions in Afghanistan and was happy with his new mission.

"It just feels nicer helping people," he said at a Pakistani air base in Ghazi where biscuits and water were being loaded into choppers. "The first time we got up there, everybody was shaking our hand," said the 22-year-old from Union Star, Missouri.

The United States is unpopular in Pakistan, and Washington is hoping the relief missions will help improve its image.

The United States has given $10 million in aid to help meet the urgent requirements, reports CBS News' Maria Usman. In addition to that initial cash infusion and the helicopters, the U.S. has also contributed more than 460,000 ready meals, 12 prefabricated bridges, four rescue boats and mobile water treatment units to support the humanitarian effort.

The U.S. military carried out larger operations in the aftermath of the Kashmir quake, as it did in predominantly Muslim Indonesia after the 2004 tsunami. Those missions were credited with boosting Washington's reputation there.

At least 370 people were injured, and troops were pulling survivors from knee-deep mud and rubble Friday in the popular Himalayan tourist destination.