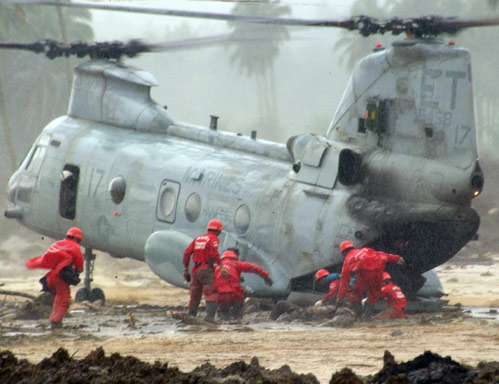 Pakistani and U.S. officials confirmed to CBS News' Farhan Bokhari that Pakistan's federal government was urgently seeking the deployment of U.S. Chinook helicopters to help with flood relief work in the northwest, where floods have killed up to 1,200 people.

Chinooks - massive, heavy-lift helicopters - are in particularly high demand because the flooding has destroyed as many as 100 bridges in the region, making it impossible to move the massive amount of relief supplies needed into the affected areas, and the huge numbers of victims out.

The last time the U.S. was asked to deploy Chinooks in Pakistan was in the wake of the devastating earthquake in 2005 which left some 70,000 people dead. Bokhari says there are suggestions already that the damages to Pakistan's infrastructure due to the flooding could be comparable to the quake, even if the death toll isn't nearly as high.

CBS News correspondent Richard Roth reports that Chinooks are far more than useful emergency relief equipment - the twin-rotor copter is a powerful political symbol of U.S. good will. Days after the 2005 earthquake, eight of the American helicopters were moved from war-on-terror duty in Afghanistan to assist in earthquake relief.

The Chinooks ferried everything from drinking water to Iranian medical supplies and shelters. Roth reports that in December 2005, the Chinooks even carried Christmas presents to Pakistani survivors and refugees (most of whom are non-Christian). Roth, who covered the earthquake relief effort in Pakistan, recalls, the stars and stripes were discreetly covered on the choppers' fuselages -- but their origin was no secret.

There's no doubt they helped save lives. Whether they also won hearts and minds in Pakistan's hinterlands is probably still a matter of debate. There's no proof the U.S. ever attached a quid-pro-quo to the relief mission - which some in Washington advocated - seeking an opportunity to obtain free access for U.S. forces to extend anti-terror operations in Pakistan's volatile border regions.