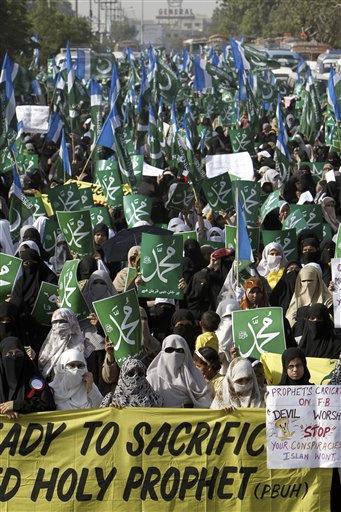 Facebook is caught up in a political-religious controversy in Pakistan, where a court ordered a temporary ban on the social networking site following a competition featuring caricatures of the Prophet Muhammad.

A message left on the competition's information page claimed it was not "trying to slander the average Muslim."

""We are not trying to slander the average Muslim. We simply want to show the extremists that threaten to harm people because of their Mohammad depictions that we're not afraid of them. That they can't take away our right to freedom of speech by trying to scare us into silence."

This is an especially delicate issue for Facebook to navigate, given local sensitivities. In 2005, a Danish newspaper published a series of cartoons depicting Muhammad. That triggered violent protests by Muslims around the world, including Pakistan, as well as death threats against the cartoonists.

The page, apparently set up by a Seattle-based cartoonist, contained caricatures of the Prophet Muhammad as well as characters from Hinduism and Christianity.

The Lahore High Court issued the interim order to the Pakistan Telecommunications Authority. The court will take up the case at the end of the month. Lawyers milling outside the courtroom chanted "Down with Facebook."

A spokesman for telecom company told the Pakistani news site Dawn that it has already blocked Facebook's URL and disseminated orders to local ISPs.

In their complaint to the court, petitioners demanded that a protest be lodged with Facebook.

A spokesman for Facebook said it is investigating the block.

"While the content does not violate our terms, we do understand it may not be legal in some countries. We are investigating this. In cases like this, the approach is sometimes to restrict certain content from being shown in specific countries," the company said in a statement.

"We can't see our religion insulted in this way," a teenage student protesting Facebook in the southern city of Lahore told CBS News' Farhan Bokhari. "America is a godless country where religion doesn't matter, but in Pakistan, we follow our faith very closely."

A Western diplomat in Islamabad told CBS News Thursday that public reaction to the Facebook page was drawing on broader underlying anger against the U.S. and the Western world in Pakistan.

"A decade after 9/11, we see people in Pakistan reacting so angrily," the diplomat said on condition of anonymity. "In this country, most people have never seen Facebook, but the public's reaction is an amazing example of how such issues can be so horribly provocative."