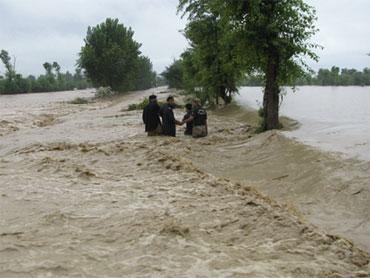 It will cost billions of dollars for Pakistan to recover from massive floods that have devastated the country, further straining a government already dependent on foreign aid to prop up its economy and back its war against Islamist militants, the U.N. said Sunday.

The warning came as authorities rushed to evacuate thousands of people in southern Sindh province, where floodwaters pouring down from the northwest submerged villages and destroyed thousands of homes. The new devastation added to the 13 million people the government estimates have been affected by the floods.

The government has struggled to cope with the scale of the disaster, which has killed 1,500 people, prompting the international community to help by donating tens of millions of dollars and providing relief supplies.

But the U.N. special envoy for the disaster, Jean-Maurice Ripert, said the need for foreign aid would be much greater going forward and could be difficult to procure given the ongoing financial crisis around the world.

Much of that money will be needed in the northwest province of Khyber Pakhtunkhwa, the site of the worst damage from floods that first hit two weeks ago after extremely heavy monsoon rains. But as the floodwaters rushed south, they also brought death and destruction to the central and southern provinces of Punjab and Sindh.

The Indus river overflowed its banks near the city of Sukkur in Sindh on Sunday, submerging the village of Mor Khan Jatoi with chest-high water and destroying many of its 1,500 mud homes.

"We were strengthening the embankment ourselves to save the village but failed and it was breached this morning and water inundated the village," said one of the affected villagers, Dadal Morai, who complained they have not received any government help.

Many flood victims have complained that they have not received aid quickly enough or at all, further undermining support for a government that was already unpopular.

"We are sitting on the bank with nothing in our hands; no shelter, no food," said another flood victim in Sukkur, Allah Bux. "We are helpless and in pain."

Thousands of other villagers in Sindh sought to escape the same fate by fleeing by donkey cart or on foot with their cattle and possessions in tow.

But even those Pakistanis whose cities and towns were relatively unscathed by the floods felt the pain Sunday from skyrocketing fruit and vegetable prices caused by the vast stretches of crops destroyed by the floodwaters.

The rising prices threaten to amplify misery in a country where many residents were already struggling with poverty and food insecurity before the worst floods in Pakistan's history struck. It could also increase anger toward the government.

The prices of basic items such as tomatoes, onions, potatoes and squash have in some cases quadrupled in recent days, putting them out of reach for many Pakistanis.

"It is like a fire erupted in the market," said Mohammad Siddiq as he purchased vegetables in the city of Lahore. "Floods and rains have made these things unaffordable."

At least 1.4 million acres of crops were destroyed in Punjab, the breadbasket for the rest of Pakistan, said the U.N. Many more crops were devastated in the northwest, where many residents were still trying to recover from intense battles between the Taliban and the army last year.

"The flooding has caused massive damage to crops and also to the reserve that people had at their houses," said Amjad Jamal, spokesman for the World Food Program, which has provided food to more than 265,000 people in the northwest.

"Khyber Pakhtunkhwa was a food insecure province even before the floods, and a lot of areas are such that people can't afford even one meal a day," said Jamal.

At least 4 million people will need food assistance across Pakistan for the next three months at a cost of nearly $100 million, said Jamal.

Many foreign countries have stepped in to help the government, including the U.S., which has pledged millions of dollars and provided six military helicopters to help evacuate victims from the northwest and deliver much needed food and water. About 85 U.S. soldiers are involved, though ongoing rain has limited their flights.

But the government has also had competition from hard-line Islamist charities that have provided victims with food and shelter, including one organization allegedly linked to the militant group Lashkar-e-Taiba, blamed for deadly attacks in the Indian city of Mumbai in 2008 that killed more than 160 people.

Pakistani Prime Minister Yousuf Raza Gilani asked for more help from the international community Sunday, saying the government couldn't cope with the disaster on its own.

"We will exhaust our resources to rescue, provide food, medicine and shelter, but it is beyond our capacity, so we will appeal to the world," said Gilani during a visit to Sukkur.