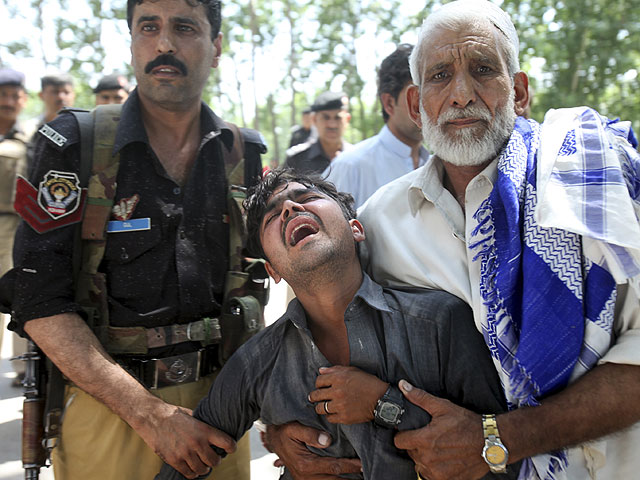 (AP) PESHAWAR, Pakistan - A bomb tore through a bus carrying government employees and other civilians in northwestern Pakistan on Friday, killing 19 people in an attack that served as a reminder of the continued militant threat facing the country despite a significant drop in violence over the past year, officials said.

The bus was near the city of Peshawar when the bomb planted inside it exploded, almost completely destroying the back half of the colorfully decorated vehicle. The dead included seven women, said senior police officer Sajad Khan. Another 42 people were wounded in the explosion, he said.

Jalal Khan, 14, was standing in the aisle of the crowded bus when the bomb went off, and his right arm was slashed by a piece of metal.

"We all fell on the floor of the bus, and people were crying for help," said Khan, while receiving treatment at a local hospital. "I was unable to see anything because there was a lot smoke, and I was having trouble breathing."

The bomb contained about 18 pounds of explosives and was set of with a timing device, said Shafqat Malik, a police explosives expert.

No group claimed responsibility for the bombing.

Peshawar is located near Pakistan's semiautonomous tribal region, the main sanctuary for Taliban militants and their allies in the country. The city has suffered scores of bomb attacks over the past five years, but attacks most frequently target the security forces or top officials. Targeting low-level government employees is rare.

The Taliban is waging a bloody insurgency seeking to overthrow the government, partly because of its alliance with the United States. The military has fought back but has had trouble clearing areas of the tribal region of militants. Attacks have dropped in recent months, most likely because of military operations.

Residents frantically shuttled bloodied victims from the bombing to the hospital in taxis, trucks and other private vehicles in the aftermath of the attack, local TV footage showed. Officials wheeled one woman into the hospital on a stretcher. She was covered by a blanket, and her clothes were soaked with blood.

Mohammed Javed, 35, was injured in the shoulder during the attack, but most of the blood soaked into his clothes came from other victims, he said.

"Luckily I was in the front part of the bus, and the bomb went off in the back," Javed said at the hospital. "Something hit me in the shoulder, but I kept my senses and started helping badly hurt people."

The bus departed from a government office in Peshawar and was headed for the nearby city of Charsada, said Javed. Both government employees and ordinary civilians normally used the bus, he said.

Iftikhar Hussain, the information minister for Khyber Pakhtunkhwa province, where Peshawar is the capital, said the government would relentlessly target the militants if they did not give up their fight.

"For the sake of protecting people, we are always ready for negotiation, but if the terrorists are not ready to stop, the only option left for the government is to go for a massive operation against the terrorists wherever they are," said Hussain.