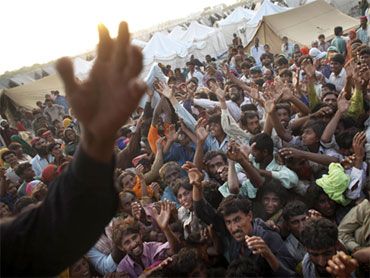 The United Nations appeared to have met its target of $460 million in immediate aid for flood-stricken Pakistan on Thursday after the U.S. and other nations significantly upped their pledges.

The rush of promised help came after U.N. Secretary-General Ban Ki-moon, addressing a hastily called meeting of the General Assembly, urged governments and people to be even more generous than they were in the 2004 Indian Ocean tsunami and this year's Haiti earthquake, because the floods were a bigger "global disaster" with the Pakistan government now saying more than 20 million people need shelter, food and clean water.

"This disaster is like few the world has ever seen," Ban told the meeting. "It requires a response to match. Pakistan needs a flood of support."

Before the meeting, he said, donors had given half the sum the U.N. appealed for to provide food, shelter and clean water to up to 8 million flood victims over the next three months. But Ban insisted all the money was needed now - and much more will be needed later.

After listening to speeches by high-level representatives of some 20 countries, Pakistani Foreign Minister Shah Mahmood Qureshi said he was assured that the $460 million goal "is going to be easily met," including "$100 million plus" from Saudi Arabia.

Islamabad has also accepted $5 million in aid from India for flood victims, a rare expression of goodwill between the feuding neighbors at a time when Pakistan is reeling from one of its worst ever natural disasters.

Pakistani Foreign Minister Shah Mahmood Qureshi told Indian NDTV television station that the government had accepted the money from India. Such is the difficult relationship the two nations have that it took several days for Islamabad to reach the decision.

"It is highly appreciated in Pakistan and we have recognized it," he said in New York.

The head of the World Health Organization in Pakistan said Friday that there had been "sporadic cases" of cholera among 20 million people affected by the disaster, many of them living in crowded and unsanitary conditions.

But Guido Sabatinelli told reporters that "I am optimistic that there is no immediate threat of a cholera epidemic."

Local aid groups, the Pakistani and U.S. armies and international aid agencies have helped hundreds of thousands of people with food, shelter, water and medical care, but the distribution has been chaotic and has not come close to reaching everyone.

He said the WHO had sought $56 million to fund health projects, but less than half has been pledged. However, he said the international response was now growing.

"We are receiving some good pledges but we cannot buy drugs with pledges, and we need to convert them into cheques," he told a news conference in Islamabad.

He said the WHO had provided drugs to 2 million survivors and it had the stocks to reach another 4 million people in the next three months.

But "this is not enough," he said.

Aid groups and U.N. officials had worried about a slow response to the flooding, theorizing that donors who have spent heavily on a string of huge disasters in recent years are reluctant to open their wallets yet again.

Richard Holbrooke, the U.S. special envoy to Pakistan and Afghanistan, told reporters before the meeting that he believed that where the tsunami and Haiti catastrophes happened suddenly, "for about 10 days people didn't realize that this wasn't just another flood."

Earlier Thursday, after visiting flood areas with Pakistani President Asif Ali Zardari, U.S. Sen. John Kerry warned of extremists who might "exploit the misery of others for political or ideological purpose, and so it is important for all of us to work overtime."

Zardari spoke of militants who might take orphaned children "and train them as the terrorists of tomorrow."

Holbrooke said it's impossible to assess whether al Qaeda or others are taking advantage of the floods because "we can't even get in there."

U.S. Secretary of State Hillary Clinton announced that her government, already the biggest donor, would contribute an additional $60 million

The European Union raised its pledge to more than $180 million. In addition, Britain said it would double its contribution to nearly $100 million, on top of $25 million in public donations, and Germany raised its aid to $32 million.

Holbrooke warned that "many billions" will eventually be needed to rebuild Pakistan. He challenged other countries, especially China, Pakistan's close ally, which was recently crowned as the world's second largest economy, to "step up to the plate."

China's intentions were expected to become clear when its representative addresses the second session of the meeting on Friday.

At a gathering before the U.N. meeting, Qureshi said the Chinese had increased their cash assistance, supplied relief goods and taken responsibility for providing food, water and shelter to some 27,000 people in an inaccessible area in the north, "so if you put this all together, it's substantial."

For the Obama administration, Pakistan is vital for stabilizing neighboring Afghanistan and enabling American troops to withdraw. Washington has already committed to spending $7.5 billion over the next five years in the country.

The floods have affected about one-fifth of Pakistan's territory - an area larger than Italy or Arizona - straining its civilian government as it also struggles against al Qaeda and Taliban violence.

Qureshi, the Pakistani foreign minister, said every 10th Pakistani "has been rendered destitute," crops worth billions of dollars have been destroyed, and things are likely to worsen as monsoon rains continue.

He said Pakistan's army has made "substantial" gains against the terrorists, "But the peace and relative calm achieved ... are still fragile and need to be consolidated."

Famed Pakistani musician Salman Ahmad, who joined Holbrooke and others at the gathering before the U.N. meeting, stressed that 100 million of Pakistan's 175 million people are under 25 and "feel abandoned by the world."

They "have two possible futures - one of following their dreams, the other of being sucked into extremism," he said.