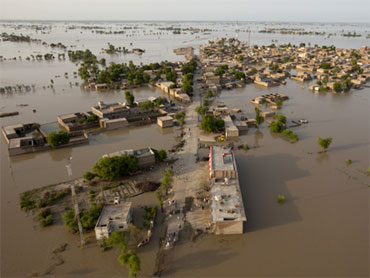 The global aid response to the Pakistan floods has so far been much less generous than to other recent natural disasters - despite the soaring numbers of people affected and the prospect of more economic ruin in a country key to the fight against Islamist extremists.

Reasons include the relatively low death toll of 1,500, the slow onset of the flooding compared with more immediate and dramatic earthquakes or tsunamis, and a global "donor fatigue" - or at least a Pakistan fatigue.

Triggered by monsoon rains, the floods have torn through the country from its mountainous northwest, destroying hundreds of thousands of homes and an estimated 1.7 million acres of farmland. In southern Pakistan, the River Indus is now more than 15 miles wide at some points - 25 times wider than during normal monsoon seasons.

The floods have disrupted the lives of 14 million people - 8 percent of the population. Many are living in muddy camps or overcrowded government buildings, while thousands more are sleeping in the open next to their cows, goats and whatever possessions they managed to drag with them.

Officials said Friday that fever and diarrhea are spreading among victims. The U.N. said limited access to safe water and crowded and unsanitary conditions in makeshift camps meant an increased risk of diseases like diarrhea, malaria, dengue fever.

And the U.N. says more flood surges may be on the way. Late Friday, local TV reported more flooding in towns and villages along main rivers in Sindh and Punjab provinces.

Going by the numbers of people affected, the disaster is worse than the 2004 Indian Ocean tsunami, the 2005 Kashmir earthquake and the 2010 Haiti earthquake combined, the U.N. says. But international aid for those disasters came at a more rapid pace, aid experts say.

Ten days after the Kashmir quake, donors gave or pledged $292 million, according to the aid group Oxfam. The Jan. 12 disaster in Haiti led to pledges nearing $1 billion within the first 10 days.

For Pakistan, the international community has given or pledged about $102 million since the flooding began in earnest in late July, U.N. figures show.

U.N. officials on Wednesday launched a formal appeal for $460 million for immediate relief for Pakistan, and have said the country will need billions more to rebuild after the floodwaters recede.

The United States has donated the most, at least $70 million, and has sent military helicopters to rescue stranded people and drop of food and water. Washington hopes the assistance will help improve its image in the country - however marginally - as it seeks its support in the battle against the Taliban in neighboring Afghanistan.

"The international recognition of this disaster has not yet been sufficient to its dimensions," U.S. envoy Richard Holbrooke told the Council on Foreign Relations. "That is because floods, unlike earthquakes and tsunamis, are not sudden catastrophes that hit and then the reconstruction begins. They're rolling crises, which grow and are initially underestimated."

Comparatively low-key coverage in the international media and a lack of celebrity involvement has also kept the flood disaster off many would-be givers' radar, said Molly Kinder, a Pakistan aid expert with the Washington-based Center for Global Development.

The civilian government's response to the disaster has not inspired confidence among many donors. President Asif Ali Zardari was criticized for going on a state visit to Europe during the disaster and making time to visit a family-owned chateau in France.

Pakistan's economy is already dependent on foreign aid and has received billions of dollars since 2001 because of its role in the fight against Islamic militants.

Maurizio Giuliano, a U.N. spokesman in Pakistan, said one reason more donations haven't rolled in could be that the death toll in the floods was low compared to other high-profile disasters. The Kashmir earthquake killed nearly 80,000 people, while the death tolls in the tsunami and the Haiti quakes were even higher.

"Unfortunately, sometimes a segment of the public only looks at the death toll" even though the number of people whose lives are disrupted may be the more important figure, he said.

The 2004 Indian Ocean tsunami attracted a record more than $13 billion in donations, partly because it happened during the Christmas season when many Westerners feel particularly generous. Also, some Westerners were caught up on beaches in Thailand and captured the disaster on video. Much of the money came from individuals.

"With the Pakistan floods coming so close on the heels of the Haiti earthquake, donor fatigue is also a problem, and has slowed the pace of individual charitable giving and private donations," Kinder said.

The country has reeled between natural and man-made calamities over the past five years. Political instability, a violent Islamist insurgency and severe economic mismanagement have already forced Pakistan to turn to the outside world for help several times.

Already this year, the U.N. appealed for $661 million to help Pakistan deal with a refugee crisis within its borders caused by its fight against the Taliban and other Islamist groups. It hasn't gotten even half that amount from donors yet, according to a U.N. website that tracks aid pledges.

"The tone that a lot of donors were taking, not explicitly but implicitly, was 'You guys again?"' Zaidi said.

It's difficult to track how much aid Pakistanis themselves have offered to relief efforts, but indigenous groups have no doubt done the most to help, especially in the early days. Islamic groups and others are collecting donations throughout the country and delivering food and medicines by truck.

Aides to the prime minister, who has set up an emergency relief fund, could not be reached Friday. But anecdotal evidence suggests the giving - at least to government bodies - has been relatively slow, though private efforts may be having more success.

A perception that many of the country's politicians will simply pocket the money may explain why, Zaidi said.

"When people call me and say they want to help, they say 'We'll do anything, we're just not going to give money to the government,"' he said.