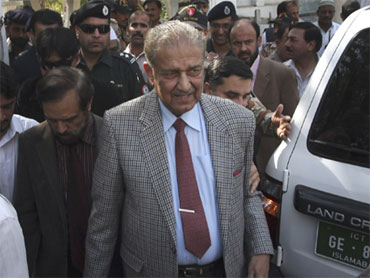 A Pakistan court has maintained restrictions on a nuclear scientist who allegedly leaked atomic weapons secrets to Iran, North Korea and Libya.

The court ruled Monday that A.Q. Khan was not allowed to talk about nuclear weapons technology and must inform security agencies before he leaves his house so they can accompany him wherever he goes.

It was ruling in response to a petition by Khan asking that some or all of those curbs be lifted.

His house is guarded by many security officials. The ruling did not say whether they would be withdrawn.

The case of A.Q. Khan is being watched closely in the United States and other Western nations because they fear he may be a proliferation risk.

Khan was detained in December 2003 and admitted on television to sole responsibility for operating a network that spread nuclear weapons technology to Iran, North Korea and Libya. Khan, regarded by many Pakistanis as a hero for building the country's first nuclear weapon, has since retracted that statement.

Khan, now in his 70s, was pardoned by then-President Pervez Musharraf, but immediately placed under de facto house arrest. Since then, he has challenged that in the courts, and in recent years has been allowed some freedom.

The Lahore High Court ruled Khan was still not allowed to talk about nuclear weapons technology and must inform security agencies before he leaves his house so they can accompany him wherever he goes, according to his lawyer Ali Zafar.

Zafar said the court had slightly eased some of the curbs, saying Khan must now inform authorities a half-day in advance if he wants to travel outside of his home town, Islamabad, as opposed to a full day previously. Within Islamabad, the notice was cut from one hour to a half-hour.

Zafar said there were no plans to appeal the verdict.

The court dismissed another petition filed by the government asking that Khan be questioned over a recent report in The Washington Post based on an account allegedly written by Khan that said Iran had tried to buy nuclear weapons from Pakistan in the late 1980s.

Zafar said his client had never spoken to the Washington Post and had presented an affidavit in court saying that.

Government officials say the security around Khan is for his own safety, but many analysts say the powerful military and intelligence agencies restrict his movement because they fear he may implicate them in past nuclear proliferation.