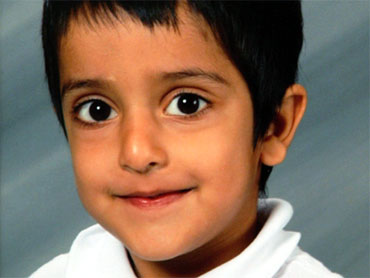 Sahil Saeed, who is of Pakistani origin, was found in a small village in Punjab province, some 20 miles southeast of Jhelum city where armed robbers seized him on March 4, Interior Minister Rehman Malik said.

British High Commissioner Adam Thomson expressed relief the boy had been found and thanked Pakistani authorities for their cooperation in the search.

"This is fantastic news that brings to an end the traumatic ordeal faced by Sahil and his family," Thomson said in a statement.

But questions remain about who kidnapped the boy and how he was released.

Malik did not reveal the identity of the kidnappers.

The family has repeatedly denied earlier claims that members were involved in the boy's abduction.

Pakistani officials initially reported that Sahil had been recovered almost a week earlier, on March 11.

The Pakistani officials later retracted those remarks, apologizing to Sky and other media outlets for misleading them on the story.

Pakistani officials said Tuesday the boy's father, Raja Naqqash Saeed, has returned to Britain against their wishes, but the family has said he is still in the country. The boy's father previously said the kidnappers had demanded 100,000 British pounds ($150,000) in ransom, an amount he said the family could not afford.

Sahil's grandfather, Raja Mohammed Basharat, told ARY television Tuesday that "according to my information, no ransom has been paid."

Sky News reported, however, that at least one senior law enforcement official in Pakistan said a ransom was paid to secure Sahil's release.

Basharat told The Associated Press earlier that he was trying to contact the boy's parents "to share the good news."

Malik said Pakistani authorities still have custody of the boy and are trying to determine to whom he should be released.

The number of kidnappings for ransom has soared in Pakistan, where Taliban-led militancy and a struggling economy have fueled crime. Most victims are Pakistani nationals.