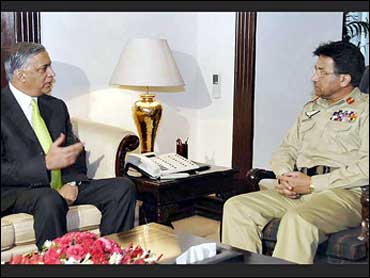 Musharraf was nominated by the ruling Pakistan Muslim League-Q party after he offered this past week to quit as army chief if he wins another five-year term from lawmakers on Oct. 6.

Aziz, who came to power in 2004 after then-Prime Minister Zafrullah Khan Jamali resigned over differences with Musharraf, is supervising the powerful military leader's campaign by holding meetings with legislators.

On Friday, he told Cabinet ministers at his office that Musharraf's re-election "will auger well for the stability, progress and prosperity of Pakistan and move the country further on the path of democracy," the statement said. He did not elaborate.

Aziz made his comments shortly after Musharraf shuffled the military brass, pressing on with his plan to stay in power despite simmering street protests.

Opposition parties claim Musharraf can't legally contest the vote while still in uniform. They vowed Friday to quit Parliament to deny him legitimacy if his candidacy survives a challenge in the Supreme Court.

Musharraf's popularity and his power have eroded since his botched effort to fire the court's chief justice earlier this year. His administration is also struggling to contain a surge in Islamic militancy amid unpopularity over Pakistan's alliance with Washington.

Even if Musharraf restores civilian rule, the top army post will remain a pivotal position for a country that has alternated between weak civilian governments and military rule during its 60-year history.

In a preliminary shuffling of the army's top ranks, the military announced the promotion of six top commanders to lieutenant general.

Musharraf appointed Nadeem Taj - his military secretary when he seized power in a 1999 coup - as director-general of the powerful Inter-Services Intelligence agency.

He replaces Ashfaq Kiani, who is among the top generals tipped by analysts as a possible successor to Musharraf as army chief.

Another possible successor, Tariq Majid, was replaced as the corps commander of Rawalpindi by Mohsin Kamal.

The military didn't say whether Kiani or Majid were being promoted or retired.

Musharraf has called for moderate political forces in Pakistan to unite to defeat extremism and has held talks on a possible power-sharing deal with former Prime Minister Benazir Bhutto, a liberal vowing to return home Oct. 18 after eight years of self-exile.

However, he faces vociferous opposition from other political foes, including Islamists bitterly opposed to his alliance with Washington.

On Friday, about 1,000 flag-waving supporters of Pakistan's biggest religious party, Jamaat-e-Islami, rallied outside the Supreme Court where a nine-judge panel heard petitions challenging Musharraf's eligibility for the election. They adjourned until Monday.

An electoral college comprising all federal and provincial lawmakers is to choose the next president. Parliamentary elections are to follow by January.