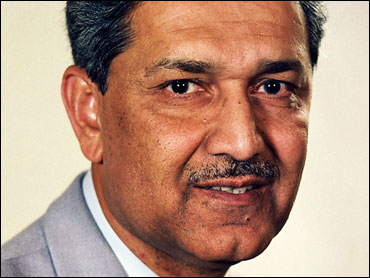 Pakistan's former top nuclear scientist and the founder of the country's nuclear bomb project on Monday denied facilitating the flow of nuclear arms and technology to foreign countries, notably Iran and North Korea, as the government mounted a fresh legal initiative to question him on the issue.

Abdul Qadeer Khan, the Dutch-trained nuclear scientist who has practically lived under house arrest since early 2004 after international investigations revealed links to an illegal international nuclear ring, continues to be of intense interest to the United States. The U.S. is particularly interested in seeking direct access to him, to shed light on the extent to which Iran's alleged clandestine nuclear program is developed.

The meeting, known as the U.S.-Pakistan "strategic dialogue," is widely expected to discuss contentious issues between the two countries, notably the campaign against Taliban and al Qaeda militants in the Afghanistan-Pakistan border region, and Pakistan's continuing bid for access to civilian nuclear reactors from the U.S.

But divisive issues between the U.S. and Pakistan include the controversy unveiled in 2004, when Khan was accused of having traded nuclear know-how and technology with Iran, Libya and North Korea.

While Pakistani leaders have claimed that a network involved in proliferation working under Khan has been put out of action, there has been a price for the country. Neighboring India and the U.S., under former president George W. Bush, formally reached an agreement for Washington to allow the supply of civil nuclear reactors to India. But in contrast, Pakistan has been denied such an agreement, mainly driven by U.S. concerns over the proliferation network.

On Monday, Pakistan's government formally asked a provincial high court for permission to question Khan on his dealings with foreign countries. The move, ahead of the Washington meeting on Wednesday, was immediately seen by senior Western diplomats as a ploy to appease the U.S.

"A.Q Khan has already been questioned and that is what Pakistani officials have said on record in the past. They don't really need to question him for anything revealing," said one Western diplomat in Islamabad who spoke to CBS News on condition of anonymity.

Khan, in brief comments to CBS News in a telephone interview said: "I have said before and I say again, these accusations of proliferation leveled against me are baseless. I think they are meant to appease the outside world." He did not name a specific foreign country though some of his past comments have targeted the U.S.

Senior Pakistani officials said the move in the court was meant to demonstrate to the U.S. and other foreign countries that Pakistan had taken every possible step to block the future possibility of nuclear proliferation.

"What happened under A.Q Khan was a mistake. We are very keen to seek civil nuclear reactors from the U.S. and we want to demonstrate to them that proliferation will neither ever be allowed or tolerated again in Pakistan," said one Pakistani foreign ministry official who spoke to CBS News on condition of anonymity.