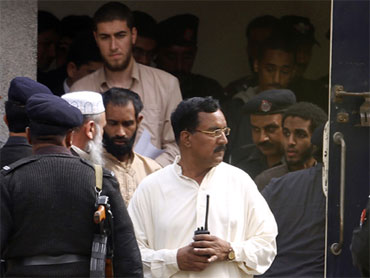 Prosecutors seeking to indict five Americans on terror-related offenses presented their case to a Pakistani judge Tuesday, laying out charges including waging war against Pakistan and plotting to attack the country, a defense attorney said.

The men, all young Muslims from the Washington, D.C., area, were arrested in December in Punjab province not long after reaching Pakistan. They had been reported missing by their families in November after one left behind a farewell video showing scenes of war and casualties and saying Muslims must be defended.

The men could be indicted on as many as seven charges during their next hearing on March 10, lawyer Hamid Malik told The Associated Press. The judge ordered the defense to review the prosecution report presented in the Sargodha town court and to prepare a rebuttal.

The punishments the men face if convicted could be as severe as life imprisonment.

Pakistani police have publicly made several accusations against the young men, claiming the suspects contacted Pakistani-based jihadi groups. But their lawyers say they were heading to Afghanistan and had no plans to stage attacks inside Pakistan.

CBS News' Farhan Bokhari reports that the charges sought by prosecutors do include alleged intentions to travel to Pakistan's neighboring countries in an attempt to topple their governments.

During past court hearings, the men have claimed they were tortured by Pakistani police and FBI agents. Pakistan and the U.S. have denied those allegations.

The U.S. has pressed an often-reluctant Pakistan to crack down on militants on its territory, many of whom are believed involved in attacks on American and NATO forces across the border in Afghanistan. At the same time, several recent cases have highlighted incidences of Americans signing up to join the insurgents on both sides of the border.

Bokhari reports the story of the five Americans, which has been widely followed in Pakistan, has raised questions over the ease with which individuals with terrorist intentions are able to travel back and forth between Pakistan and the Western world.

After Tuesday's court appearance, senior Pakistani government officials told Bokhari the country has already tightened its monitoring of other young men carrying Western passports, but with roots in Islamic countries, traveling to Pakistan.

"We already had a number of controls in place," one Pakistani official told CBS News on condition of anonymity. "In light of this case, we have further tightened the monitoring - right from the time someone submits their visa application to the time they arrive in Pakistan."