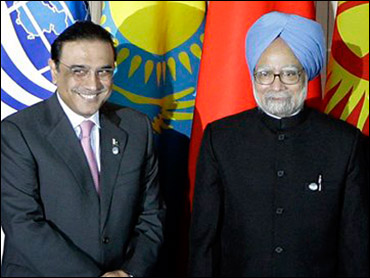 Pakistan's navy successfully test-fired a series of missiles and torpedoes Friday in what it called a message to "nefarious" forces - an apparent reference to longtime rival India.

While the two nuclear-armed neighbors have taken slow steps toward restarting peace talks, they also have a history of using weapons tests as a form of diplomatic saber-rattling.

The Arabian Sea tests employed aircraft, submarines and ships. It was not immediately clear if the missiles were capable of carrying nuclear warheads.

Meanwhile, police said Friday that at least 12 people were killed in a suicide bombing in the eastern Pakistani city of Lahore, the second such attack apparently aimed at the country's security forces in a week.

Both India and Paksitan regularly test their missile systems, and usually notify each other ahead of such launches in keeping with a diplomatic agreement.

But Friday's launches were followed by a navy statement saying the tests showed the navy's commitment to "defending the motherland." It added: "This strike capability would also send a message of deterrence to anyone harboring nefarious designs against Pakistan."

Such statements have been rare in recent years, as the two nations have struggled to keep their peace process limping along. Late last month, India and Pakistan held their first official talks since the 2008 Mumbai terrorist attacks, which India blamed on the Pakistan-based militant group Lashkar-e-Taiba.

It was not clear whether the statement was an intentional attempt to stir the diplomatic waters, but similar wording has been used in the past to send warnings to New Delhi.

Other Pakistani officials refused to expand on the navy statement.

India and Pakistan have fought three wars since they gained independence from Britain in 1947.

The two sides began talks aimed at resolving their differences over the Himalayan region of Kashmir and other disputes in 2004. India put the peace process on hold soon after the Mumbai attacks.

Indian officials could not immediately be reached for comment.