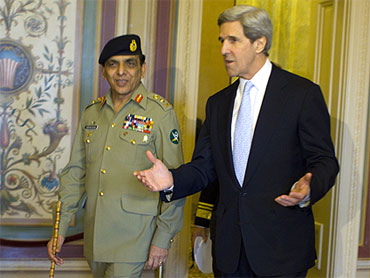 Pakistan is expected to seek help and funding for an ambitious nuclear reactor program Wednesday as key leaders from the energy-starved South Asian nation meet their counterparts in Washington for talks on forging closer ties.

A senior Pakistani official already in Washington told CBS News the meetings represent "the most important event in years" for relations between the two nations inextricably linked by the war against Islamic extremists.

Secretary of State Hillary Rodham Clinton will lead the U.S. delegation, while the Pakistani contingent will be headed by the nation's powerful army chief, Gen. Ashfaq Kayani, and Foreign Minister Shah Mehmood Qureshi.

Speaking on condition of anonymity, the Pakistani official said the talks, which have been dubbed a "strategic dialogue" between the U.S. and Pakistan, come as both nations "recognize they have no choice but to cooperate."

That cooperation is driven largely by the Obama administration's efforts to nudge Pakistan into taking a more active role in combating Taliban and al Qaeda militants along the country's border with Afghanistan, as the U.S. and its NATO allies widen their military operations inside that country.

Those expanding military operations have been preceded by reports that the U.S. and other NATO countries are now more prepared to accept a political role for some elements of the Taliban in a future ruling structure in Afghanistan -- provided those elements agree to renounce violence and ties to al Qaeda.

Pakistan, with its long standing ties to the Taliban and other Islamic militant groups, is seen by the U.S. as the ideal candidate to bring the Taliban to the negotiating table for the "reconciliation" talks.

"The Americans recognize the key to future stability in Afghanistan, and the U.S. eventually pulling out its troops, lies with Pakistan," a Pakistani intelligence official told CBS News on condition of anonymity. Pakistani officials generally do not comment on the record on matters of national security or diplomacy.

Western diplomats warn, however, that President Obama's administration may not be amenable, at least not immediately, to all of Pakistan's demands for reciprocal cooperation on the terror front.

Among the more contentious issues is Pakistan's quest for U.S. cooperation on a civil nuclear reactor -- similar to a deal granted by Washington to Pakistan's neighbor and long-time rival India under former President George W. Bush.

Ahead of Wednesday's talks, Clinton played down the possibility of immediate progress on securing a nuclear energy pact with Pakistan. Speaking to Pakistan's Express TV channel, she noted that the agreement with India came after "many, many years" of dialogue.

"I think, on the energy issue specifically, there are more immediate steps that can be taken," said Clinton, suggesting America could offer help developing Pakistan's electricity grid, upgrading power plants and exploring other sources of energy.

Pakistan's government on Monday asked one of the country's five provincial high courts to grant permission for a re-questioning of A.Q. Khan, who has effectively lived under house arrest in Islamabad since the allegations surfaced.

The government's request was seen by Western diplomats as an attempt to curry favor with the Obama administration ahead of Wednesday's talks.

Washington has, in the past, sought permission for American officials to interview Khan on the scale of his dubious dealings, but has always been politely refused by Pakistani officials, who say they've done the job thoroughly enough themselves.

It's thought that Khan might have unique insight into the pace at which Iran's nuclear program was developing while he was dealing with Tehran's ruling clerical establishment.

"India, Pakistan -- we have been in this together in South Asia, in many ways," said Bashir. "What is good for India should be good for Pakistan."