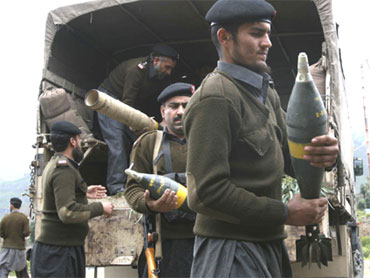 Pakistan's intelligent agents have arrested a senior Afghan Taliban commander, officials said Thursday, the latest move in a crackdown against the insurgent network in Pakistan.

Agha Jan Mohtasim, a former finance minister for the Taliban before the U.S-led invasion in 2001, was detained in the southern city of Karachi, two intelligence officials said. They did not say when the arrest was made, and spoke on condition of anonymity because they were not authorized to give their names to the media.

Taliban sources confirmed Mohtasim's arrest on Friday in phone calls with CBS News' Sami Yousafzai. The militants say he was apprehended about two weeks ago.

Mohtasim maintained direct contacts to many Taliban supporters in Karachi, and was still responsible for drawing a significant amount of money into the organization, adds Yousafzai.

Pakistan and Afghan officials have said at least four other Afghan Taliban leaders have been arrested in Pakistan in recent weeks, including the No. 2 leader of the movement, Mullah Abdul Ghani Baradar.

The arrests have been hailed by U.S. officials and many analysts as a major blow to the Taliban in Afghanistan, though they caution that the group has rebounded from the death or detention of previous leaders.

Opinion is divided on whether the crackdown signals that the country's powerful intelligence forces are adopting a harder line against the militants.

The United Sates has long demanded Pakistan take action against the group, which critics say have long enjoyed relative sanctuary in Pakistan.

Some experts say the arrests may be aimed at removing moderates within the Taliban who were considering taking part in possible reconciliation talks with the Afghan government.

Earlier, Interior Minister Rehman Malik said he had no information on the arrest of Mohtasim. Afghan Taliban spokesman Qari Yousef Ahmadi denied he had been arrested.

There had been speculation that Mohtasim was in the running to replace Baradar, who was reportedly arrested in a joint raid with American intelligence officials.

Born in the late 60s, Mohtasim was considered close to Taliban leader Mullah Omar. He was not known to be among the most hardline group within the Taliban.

Earlier Thursday, dozens of militants attacked a security checkpoint in the northwest close to the Afghan border, sparking a gunbattle that left 30 insurgents and one soldier dead, officials said.

The battle occurred overnight in the Chamarkand area of the Mohmand tribal region, said government and military officials, speaking on condition of anonymity because they were not authorized to talk to the media.

Chamarkand borders the Bajur tribal region, where the army said Tuesday it had finally defeated Taliban and al Qaeda militants after more than a year and a half of fighting.

Washington has praised Pakistan for its recent military operations but wants the government to do even more to target militants using its territory to stage cross-border attacks against U.S. and NATO troops in Afghanistan.