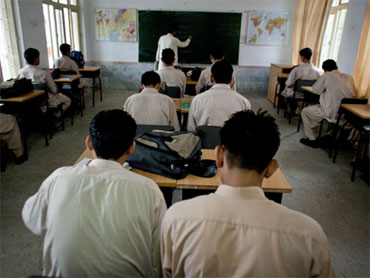 The painting is disturbing: raindrops shaped like bullets and branches intended to look like blood-soaked necks. The artist was a boy recruited by the Taliban to help kill Pakistani soldiers.

He and more than 120 other boys, some as young as 12, now go to an army-run school designed to guide youths in the picturesque Swat Valley away from the brutality and fanaticism of the Taliban.

The school offers psychological therapy and an education, a privilege for youths in an impoverished country where half the 177 million people are illiterate. Uncertain is whether the boys can find jobs once they are released at age 18 - making them again vulnerable to Taliban recruiters.

The students receive instruction in computers, science, reading, math - and religion. Verses from the Quran painted on the whitewashed walls urge the faithful to pursue a path of peace and warn of eternal damnation for those who kill.

Unable to read the Quran, the boys were told by the Taliban that Islam's holy book identifies the Pakistani army as an enemy controlled by Christian-dominated America and Hindu-dominated India, said Dr. Feriha Peracha, a neuropsychiatrist who has worked in Canada and Britain.

"They thought the Quran actually said that and told them to kill the soldiers," she said. "Religion was not their motivation but it was used."

Many of the boys are also deeply disturbed, according to Peracha. She tries to get them to deal with buried rage from Taliban exploitation. The painting showing raindrops as bullets reflects the turmoil of a boy whose job was to tell the Taliban about the presence of senior Pakistani officers in convoys. Occasionally, he would toss a grenade at military vehicles, she said.

Others are unrepentant. One of Peracha's new students was transferred to the school after being detained while trying to cross into Afghanistan to carry out a suicide attack against American soldiers.

"He's sorry, not that he was going to blow up the soldiers, but that he was caught," she said. "He is a high risk. He still needs a lot of work."

Authorities do not permit interviews with the students or allow their names to be published for fear their families might face retribution. Some still have relatives in the Taliban.

Part boarding school and part reformatory, the military set up the institution after driving the Taliban from much of the valley last year.

The army rounded up about 3,000 insurgents, including young boys recruited as informants, fighters and suicide bombers. That presented the army with a conundrum: Keep the youngsters locked up with older battle-hardened militants or free them, possibly allowing them to grow into an even more dangerous enemy.

So the army decided to set up a school for the younger captives in hopes they could learn skills and a moderate interpretation of Islam that would turn them away from extremism.

Located at the end of a potholed road, the school, called Sabaoon or New Dawn in the Pashto language, opened in September 2009 with 22 troubled boys. Enrollment has increased to 129 with a goal of accommodating 200 boys. Because the school sits on high ground, it has escaped the flooding that is ravaging parts of the region.

The first months were difficult. Fear that the Taliban would return frightened away civilian staff. The army eventually transferred three military psychologists from other parts of the country to get the school up and running.

"Nobody else was willing to come in," Maj. Gen. Ashfaq Nadeem said in his office on a fortified army base atop the Malakand Pass that leads to the Swat Valley.

When peace returned to the valley, a Pakistani nongovernment organization, Hum Pakistani Foundation, agreed to operate the school along with the army.

Most of the boys currently at the school were captured but nearly half were handed over by their families, Nadeem said.

At first, fear and mistrust caused many villagers to close ranks and hide their young militant sons.

"But they have seen how the school runs and that their sons are taught skills and now they want to get their sons in our facility," Nadeem said. At meetings organized with community elders, families are encouraged to hand over sons who display sympathy for the insurgents.

At the height of their strength, the Swati Taliban had threatened Islamabad, the federal capital, barely 60 miles away.

In the years they were the de facto rulers of the province, the Swati Taliban were among the most barbaric insurgent groups in the border regions. They circulated gruesome videos of policemen killed excruciatingly slowly with unsharpened knives, highlighting the terror on the faces of other policemen forced to watch as they awaited their turns.

The Taliban wanted to prove their fierceness "and they also wanted to instill fear," Nadeem said. "That was their way of controlling the population."

School officials believe many of the boys turned to the Taliban because the insurgents gave status and prestige to poor, ignorant youngsters facing a bleak future of poverty and unemployment.

Like juvenile detention facilities in the West, the school can keep students until they reach adulthood. When they leave, they are on parole for two years, monitored by the school and village elders.

So far 11 students have been returned to their families. Most were unable to find jobs.

Peracha and the army are trying to find alternatives for their graduates, such as vocational training centers or positions in Pakistani military academies.

In the meantime, Nadeem said, "many of the students want to return to the facility."