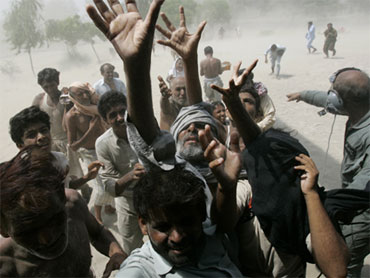 The world has given or pledged more than $800 million to help Pakistan cope with massive floods, the foreign minister said Sunday, as workers in the south used sandbags and stones to strengthen river levees in areas threatened by rising water.

Pakistan is grateful for the international assistance, which came after the United Nations appealed for $460 million in aid for the deluged country, Foreign Minister Shah Mahmood Qureshi said.

"The total commitments and pledges that Pakistan has got so far are $815.58 million," he told reporters in Islamabad. "In these circumstances, when the West and Europe and America are going through a recession ... this kind of solidarity for Pakistan, I think, is very encouraging."

The floods began in late July in the northwest after exceptionally heavy monsoon rains, expanding rivers that have since swamped eastern Punjab province and Sindh province in the south. The deluge has affected about one-fifth of Pakistan's territory, straining the civilian government as it also struggles against al Qaeda and Taliban violence.

At least 6 million people have been made homeless and 20 million affected overall.

Aid flowed relatively slowly to Pakistan in the first weeks of the crisis, apparently in part because many countries were unaware of the vast scope of the damage. A relatively low death toll - around 1,500 people - may have contributed to misimpressions, analysts have said.

The U.S. has promised $150 million to help the country whose support it considers critical to winning the war in Afghanistan. U.N. Secretary-General Ban Ki-moon also urged nations to step up aid after a visit to Pakistan.

The floods are still wreaking havoc.

Three towns in the southern Sindh province's Thatta district were in danger over the weekend, and officials were evacuating thousands of people. The surge in the Indus River is expected to empty into the Arabian Sea after passing through.

At least two levees along the river are potential trouble spots and are being strengthened, said Hadi Bakhsh Kalhoro, an official with the Sindh provincial Disaster Management Authority.

"We are hopeful the flood will pass on to the delta without creating much trouble here," he said.

Pakistan can ill afford the crisis. The South Asian country's economy was already being kept afloat by billions of dollars in loans from the International Monetary Fund, and the cost of rebuilding after the floods will likely run into the billions.

The IMF said it will meet with Pakistani officials this week to discuss the floods and what the country must do to cope.

"The IMF stands with Pakistan at this difficult time and will do its part to help the country," said Masood Ahmed, director of the IMF's Middle East and Central Asia department.