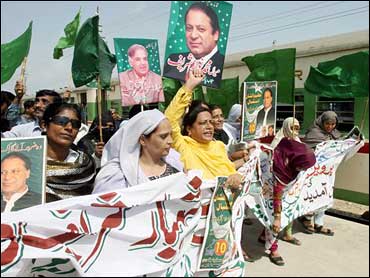 Pakistan's government urged exiled former Prime Minister Nawaz Sharif not to return home, saying Saturday he should honor a promise he made to stay away after being ousted from power.

Sharif has vowed to fly home from London on Monday to counter President Gen. Pervez Musharraf's re-election bid and run for Parliament, despite veiled threats from senior officials to put him back in jail.

Sharif was toppled in Musharraf's 1999 coup, convicted on charges of hijacking and terrorism and sentenced to life imprisonment before being released into exile in Saudi Arabia.

Information Minister Mohammed Ali Durrani said Sharif was allowed to leave Pakistan after he made pledges to leaders from countries such as Saudi Arabia and Lebanon not to return for 10 years.

Durrani said Sharif "should honor his word," and "should respect the commitment he had made with certain Islamic countries" to secure his release.

"He should not come (back)," Durrani told The Associated Press.

In a sign the government is planning a bumpy landing for Sharif, officials said Friday police had detained hundreds of supporters from his Pakistan Muslim League-N party in his political stronghold.

Sharif's party denounced the latest moves as politically motivated, and said they would backfire on Musharraf.

According to local media reports Saturday, former Lebanese Prime Minister Rafik Hariri who was assassinated in a massive bombing in Beirut in February 2005 - played a role in Sharif's release.

Hariri's son, Saad, was in Pakistan's capital Saturday to meet with Musharraf, said Durrani. He wouldn't confirm or deny media reports that said Saad also met with Sharif in London recently to remind him of his pledge not to return to Pakistan.

Meanwhile, an anti-terrorism court in the eastern city of Lahore on Friday ordered the arrest of Sharif's younger brother Shahbaz in a murder case, said Aftab Ahmed Bajwa, a lawyer for the plaintiff.

He is charged with ordering police to kill five men who were gunned down in Lahore in 1998. At the time of the killings, Shahbaz was the chief minister, or top executive, of Punjab province, and Nawaz was Pakistan's prime minister.

Ahsan Iqbal, a spokesman for Sharif's party, said Friday the moves against the Sharifs "show complete panic in the ranks of the government."

Iqbal said more than 1,300 party supporters were arrested across Punjab in the past three days. Police in Lahore put the number at about 350.

Musharraf, a key ally in the U.S. war on terror whose popularity has shrunk since his failed attempt to fire the country's top judge earlier this year, has repeatedly said the Sharifs must remain in exile for 10 years under the terms of a deal reached in 2000. But the Supreme Court ruled last month they were free to enter Pakistan and that their return should not be obstructed.

Thousands of Sharif supporters are planning to converge on Islamabad to welcome him, but there are expectations that authorities will try to block them, and there could be unrest. The Sharifs plan to travel to Lahore, the capital of Punjab and their power base, by road.

Musharraf is expected to seek re-election by lawmakers by mid-October, but has yet to make a public commitment to resign as army chief if he continues as president. Many experts say that to keep his uniform - the main source of his power - beyond 2007 would violate the Constitution.

To help smooth the way, Musharraf is trying to strike a deal with another exiled former prime minister, Benazir Bhutto, that could lead them to share power.

Durrani said Friday a final decision would come in the Muslim holy month of Ramadan, which begins in mid-September.