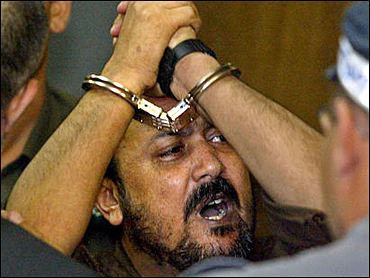 Shouting that the "uprising will be victorious," Marwan Barghouti, one of the most visible Palestinian leaders of the current violent conflict with Israel, went on trial Wednesday on charges he orchestrated more than three dozen terror attacks that killed scores of Israelis.

It is the first major court case against a Palestinian leader in the nearly two years of Mideast violence.

The bearded Barghouti, who is often mentioned as a possible successor to Palestinian President Yasser Arafat, raised his cuffed hands triumphantly as he was led into the crowded courtroom. Gesturing excitedly with his tied hands, he told reporters in Hebrew, Arabic and English that Israelis could only have security after withdrawing from Palestinian lands. "I am peaceful man," he said, adding that he continued to support a peace deal with Israel.

In the trial, Israel will try to show that senior Palestinian Authority officials were involved in planning and funding attacks against Israelis. The indictment charges that Barghouti, 43, headed terror groups in the West Bank and reported directly to Arafat.

Barghouthi, captured by Israeli forces in the West Bank in April, says he is a political leader and not involved in violence. He could face life in prison if convicted of murder.

"Our position is that the court does not have the authority to try him. We do not recognize that authority," one of Barghouthi's attorneys, Jawad Boulos, told reporters.

Barghouti's lawyers say he wants to draw attention to Israel's actions as an occupying power. "We will try to convince the world that the one that has to be brought to trial is the occupation," said Boulos.

"You cannot speak right now. You have excellent lawyers. When the time comes, you can speak. This is a procedural session right now," said Judge Tzvi Gurfinkel.

Saying he would not permit the defense to "turn this court into a political stage," Gurfinkel adjourned the hearing after the indictment was filed and set Sept. 5 as the date for the next hearing in the case.

Abbas Zaki, a member of the central committee of Fatah, predicted Israel's decision to make an example of Barghouthi would backfire and turn him into a "great national symbol" for the Palestinians.

As he was led into the courtroom Wednesday morning, Barghouti shouted in Hebrew that "the uprising will be victorious." Asked how he felt, the scruffy-looking defendant said "Baruch Hashem," or "Thanks to God," a Hebrew expression commonly used by observant Jews.

Before the session began in the Tel Aviv District Court, Barghouti was twice brought into the courtroom, only to be dragged away by guards after he launched into speeches proclaiming his innocence and blaming Israel for the violence. He was ushered into the court for a third time just before the proceedings started.

Barghouti is the leader of Arafat's Fatah movement in the West Bank. In the days of peacemaking in the 1990s, Barghouti developed friendships with some Israeli officials and helped persuade Fatah activists to recognize Israel.

However, after Israeli-Palestinian fighting erupted in September 2000, Barghouti adopted a more militant line, saying Palestinians had the right to drive Israelis out of the West Bank and Gaza Strip by force.

Barghouti, a member of the Palestinian parliament, delivered fiery speeches during street protests. He was arrested April 15 during an Israeli military sweep in the West Bank.

He maintains he is only a politician, but Israel says he was the key figure in organizing attacks by members of a Fatah-affiliated militia, the Al Aqsa Martyrs' Brigade.

Barghouti was charged Wednesday with murder, attempted murder and involvement in terrorist organizations. Israel alleges he was linked to 37 separate attacks over the past two years.

The Justice Ministry said Barghouti was the "central partner in the decisions made by organizations that in the last two years carried out a series of attacks that claimed the lives of scores of Israeli citizens and wounded hundreds."

Prosecutor Devorah Chen said the case would be based on testimony of Al Aqsa regional commanders and field activists, including Nasser Awais and Nasser Abu Hmeid, two senior militiamen captured by Israel in recent months.

Barghouti is the second most popular Palestinian leader, trailing only Arafat, according to recent polls. As the Fatah leader, Barghouti was in regular contact with many young activists. Many Fatah members are also active in the Al Aqsa militia that has claimed responsibility for many bombings and shootings.

Israeli security officials have said Barghouti was gradually drawn into direct involvement in attacks, first defending them, then funneling money to militants, and finally orchestrating them.

Israeli officials have claimed that during questioning, Barghouti acknowledged orchestrating attacks. But Barghouti and his lawyers have denied this, saying he was interrogated incessantly after his arrest.

Boulos, the defense attorney, said he would not call witnesses. Barghouti does not recognize the jurisdiction of the Israeli court, Boulos said. "Marwan has prepared a list of charges against Israel and the Israeli occupation," Boulos said.

Meanwhile, Israel's Supreme Court blocked an Israeli attempt to try out a new policy aimed at deterring suicide bombers. The court stopped the expulsion of three relatives of Palestinian militants from the West Bank to the Gaza Strip for 15 days, ordering a formal hearing.

The Israeli military demolished another home of an alleged Palestinian attacker Wednesday, this time tearing down a house in Dahariya in the southern West Bank.

Israeli officials say the threat of expelling relatives, along with destruction of family homes of suicide bombers, could deter the attackers. More than 250 bystanders have been killed in more than 70 suicide Palestinian bombing attacks during 22 months of violence.

Cabinet Minister Dan Naveh said there are already signs that the new policy is preventing attacks. "I am very sorry that the Supreme Court decided to grant an injunction for two weeks," he told Israel TV. "We are in a war, every day it's a war."