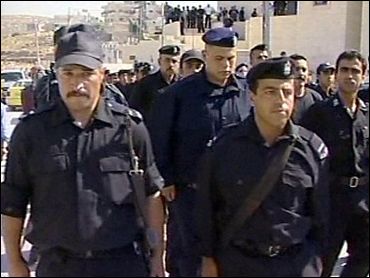 Sirens blaring, Palestinian police moved Wednesday into the West Bank town of Bethlehem, the second area handed over by Israel under a U.S.-backed Mideast peace plan.

As the column of police in dark blue uniforms entered Manger Square, reports CBS News Correspondent Robert Berger, bells rang in the Church of the Nativity. The crowd welcoming the police wasn't very large and was fairly somber, because the Palestinians are skeptical that the peace process is going to work. They know that Israeli forces are nearby and could come back at any time.

The handover of the ancient town comes after an upbeat summit between the Israeli and Palestinian premiers boosted hope for an end to 33 months of bloodshed.

Under the agreement, Israel will not launch raids into the city and Palestinian police will prevent terrorist attacks.

Berger reports life Wednesday was returning to normal on the busy streets of Bethlehem. Shops were open. There was not an Israeli soldier in sight.

Army transport trucks started carrying away armored vehicles and containers full of equipment from two Israeli bases near Bethlehem on Tuesday, and Palestinian security forces waited to move in to the town as soon as the last soldiers left.

"Today, we're restoring our leadership in one city in this land," Palestinian special forces commander Hani Deek said. "I hope the rest will soon follow."

Bethlehem is a test case: If the Palestinians keep the peace and curb terrorism, Israel plans to withdraw from other West Bank towns.

"They are making fools out of us," said Jaudat Joude, who has been unable to reach his job at a Jerusalem welding factory since the uprising began almost three years ago. "If you want to make some serious changes, open the roads, remove the checkpoints and let people in to work. Then maybe we can believe that the Israelis have good intentions."

Israeli forces have occupied Bethlehem several times during the conflict, once holding the Church of the Nativity under siege for a month, demanding surrender of Palestinian gunmen who had fled inside the shrine marking the traditional birthplace of Jesus.

After a suicide bombing on a Jerusalem bus on Nov. 21, carried out by a Palestinian from Bethlehem, soldiers went back in and stayed.

In a statement, the Israeli military said it would be in charge of security of Israelis, including settlers in nearby villages. Palestinian security forces, meanwhile, "have committed to preventing and thwarting terrorist attacks in the areas under their responsibility."

A similar formula held in the Gaza Strip, where Israeli troops pulled out late Sunday.

Speaking in front of Israeli Prime Minister Ariel Sharon's office before their Tuesday summit, Palestinian Prime Minister Mahmoud Abbas said the turnover of Gaza and Bethlehem would be "followed by pullbacks from the rest of the cities and towns and Palestinian refugee camps."

It was the first time the two leaders spoke before reporters and cameras at a Jerusalem summit, their third in six weeks.

Palestinian and Israeli Cabinet ministers, some of them enemies until recently, sat at a table next to the two lecterns, chatting easily and smiling, establishing a relaxed setting for conciliatory language not heard in this region during three years of bloodshed.

"Even if we are required to make painful compromises, I will be willing to make them for the sake of true peace — a peace for generations, the peace that we all yearn for," Sharon said.

Abbas responded in kind, saying, "Enough suffering, enough death, enough pain. Let us stride forward with courage and without hesitation to the future we all deserve."

Despite the truce announcement, shots were fired Wednesday at workers building a security fence at the West Bank city of Tulkarem, the military said. A guard was lightly injured. On Tuesday a Palestinian man opened fire at a West Bank checkpoint and was killed by troops.

There was no claim of responsibility. However, renegade militia fighters have rejected the truce.