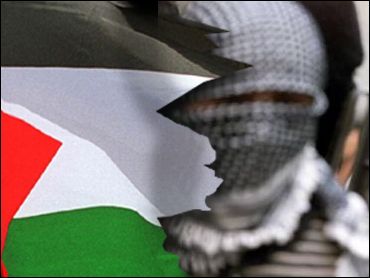 Twelve 12 Palestinian factions, including the Islamic groups, were to resume talks Thursday in Gaza City on a joint political platform. Talks broke down earlier this month after Hamas and Islamic Jihad vetoed clauses calling for an end to attacks on Israelis and implying recognition of Israel. Yehiyeh was to participate in the talks, marking the first time a senior Palestinian Authority official is involved.

Senior Palestinian officials were to meet envoys of the international "quartet" of Middle East peace overseers in Paris on Thursday to update them on steps to reform the Palestinian Authority, deemed crucial to reviving peace talks with Israel.

There were two meetings with quartet envoys in Ramallah in the past month to discuss international financing of reforms and ensuring transparency in Palestinian handling of the funds.

The quartet is comprised of the United States, Russia, the European Union and the United Nations.

In the village of Saida in the northern West Bank, a 55-year-old Palestinian woman was killed and her son was wounded Thursday when a bomb exploded at the chicken farm where they were working, Palestinian security officials said.

The farm belonged to an Islamic Jihad fugitive, Ahmed Yassin, 30, the officials said. The fugitive is not related to the Hamas leader by the same name.

Also in the northern West Bank, Israeli troops arrested the Hamas leader in the town of Qalqiliya, Mohammed Wajeh Quoa, 41, Palestinian officials said. Quoa had been arrested repeatedly by Israel in the past and in 1992 was deported to south Lebanon for one year, along with 400 other Islamic militant activists.

The arrest came a day after Israeli security officials announced the capture of a five-member Hamas cell, including four Arab residents of Jerusalem. Cell members are suspected of detonating a series of bombs, including the July 31 blast in the student cafeteria of Jerusalem's Hebrew University.

Nine people were killed in the explosion, including five Americans.

Israel's interior minister said he had begun steps to revoke the residency status of four East Jerusalem Arabs held for attacks including the college bombing.

Interior Minister Eli Yishai said the four East Jerusalem Arabs had exploited the freedom of movement and employment afforded them by their permanent residency status in Israel, and that the ministry was working to revoke it.

"There is no need to wait for a trial, because the evidence is clear and based on intelligence of their terrorist activity," Yishai told Israel Radio on Thursday.

Security officials said the bomb was planted by Mohammed Oudeh, a university handyman who used his entry permit to walk into the campus. Oudeh planted the explosives in the cafeteria, walked away and set them off with a cell phone, causing widespread destruction, security officials said. The next day, Oudeh was called to work by his unsuspecting boss, an Israeli contractor, and was asked to help repair bomb damage in the cafeteria.

Oudeh's cell is also blamed for suicide bombings in a Jerusalem cafe and a pool hall in the Tel Aviv suburb of Rishon Letzion that killed 26 people.

The arrests of the four east Jerusalem residents took many Israelis by surprise, because Palestinians living in the city had been relatively inactive in the past two years of Israeli-Palestinian fighting.

About 200,000 Palestinians live in east Jerusalem, the sector Israel captured from Jordan in the 1967 Mideast war and later annexed to its capital. The Palestinians in the city have residency permits and blue Israeli ID cards that give them freedom of movement.

Jerusalem Mayor Ehud Olmert said that "the vast majority" of Jerusalem's Arabs are peaceful. Asked about measures to prevent further acts of terror, he said, "One thing is certain. There will be no wall down the middle of Jerusalem."

East Jerusalem Arabs have the rights of Israeli citizens except three: they cannot vote in general elections; cannot hold Israeli passports — many have Jordanian ones because the area was controlled by Jordan until 1967 — and they lose their residency papers if they move out of East Jerusalem.

Israeli and Palestinian commanders met Wednesday to discuss extending Palestinian security control over the Gaza Strip. On Sunday, the two sides agreed to use Bethlehem and Gaza as a trial, pulling Israeli troops back and handing security duties over to the Palestinians. If the test is successful, Israel has said it would ease restrictions in other parts of the West Bank.

The Israeli military said that at the meeting, the Palestinians pledged to take immediate action to restore calm and prevent violence, while the Israelis promised further steps to ease the humanitarian situation for the Palestinian population.