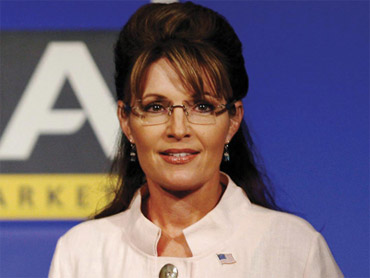 The release date for the 400 page book has been moved up to November 17th, the Associated Press reports, after initially having been scheduled for a spring release.

"Governor Palin has been unbelievably conscientious and hands-on at every stage, investing herself deeply and passionately in this project," Harper publisher Jonathan Burnham told the AP. "It's her words, her life, and it's all there in full and fascinating detail."

The first printing of the 45-year-old Palin's memoir will be 1.5 million copies, an extremely high number that matches the initial printing of Ted Kennedy's memoir, "True Compass."

The Republican base is still wild about Palin, Politico writes today, despite her resignation as Alaska governor midway through her term and criticism from the media and members of both major political parties.

"…She remains extremely popular with the GOP grass roots, and most Republican Party leaders would jump at the chance to have her headline one of their events," Michael Falcone & Zachary Abrahamson write in a piece based on a series of interviews. "…Republicans at the grass-roots level and their leaders still hold a very favorable impression of the former Alaska governor." (Check out Katie Couric's interview with Palin from a year ago.)

How successful Palin's book will be depends in large part on how accurate and widespread opinions like this one are, which was given to Politico by Heidi Gansert, the Nevada House minority leader: "People saw her as one of them — someone who could relate to an everyday person. She's not one of the political class. I also believe that women appreciated her message and what she'd accomplished in her political career and family life. A woman who has a young family, who is able to become the governor of Alaska — a lot of people, women who worked the everyday jobs with their families — they know that she's experiencing the same things they are."

Despite giving up the governor's office and proving to be a divisive vice presidential candidate, Palin continues to have passionate followers, including one who paid $63,500 to have dinner with her for charity. She is considered a serious contender for the 2012 GOP presidential nomination, though she has yet to declare her plans going forward.

The title of Palin's book is apparently a reference to stories that came out before Election Day that advisors to GOP Presidential Nominee John McCain felt Palin was "going rogue" and not following the advice and message of those running the campaign.