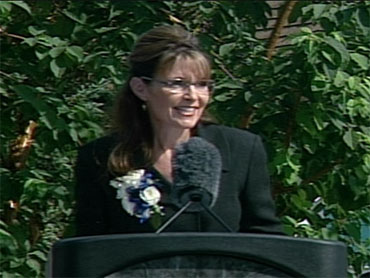 Last month, Palin created controversy when she said that the Democrats' health plan included "death panels," a claim which has been widely debunked in the media.

In Tuesday's op-ed, Palin pointed to an interview that Mr. Obama conducted with the New York Times in April that mentioned a group working outside of "normal political channels" to give guidance about patients dealing with end-of-life issues.

"Is it any wonder that many of the sick and elderly are concerned that the Democrats' proposals will ultimately lead to rationing of their health care by—dare I say it—death panels? Establishment voices dismissed that phrase, but it rang true for many Americans," Palin wrote. "Working through 'normal political channels,' they made themselves heard, and as a result Congress will likely reject a wrong-headed proposal to authorize end-of-life counseling in this cost-cutting context."

Palin also questioned the economic feasibility of increased government involvement in health care, arguing it would add billions to the deficit and affect the wages of "everyday Americans."

Instead, Palin advocated for "market-oriented" and "patient-centered" solutions, such as giving all individuals tax benefits received by those who get medical coverage through their employers, reforming tort law, and allowing people to buy insurance across state lines.

"Rather than another top-down government plan, let's give Americans control over their own health care," Palin wrote.