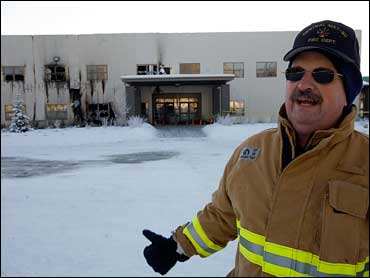 Gov. Sarah Palin's home church was badly damaged by arson, leading the governor to apologize if the fire was connected to "undeserved negative attention" from her failed campaign as the Republican vice presidential nominee.

Damage to the Wasilla Bible Church was estimated at $1 million, authorities said Saturday. The fire was set Friday night while a handful of people, including two children, were inside, according to Central Mat-Su Fire Chief James Steele. No one was injured.

He said the blaze was being investigated as arson but didn't know of any recent threats to the church. Authorities didn't know whether Palin's connection to the church was related to the apparent arson or not, Steele said.

"It's hard to say at this point. Everything is just speculation," he said. "We have no information on intent or motive."

Steele would not comment on the means used to set the fire.

Pastor Larry Kroon declined to say whether the church had received any recent threats.

"There are so many variables," he said. "I don't want to comment in that direction."

Palin, who was not at the church at the time of the fire, stopped by Saturday. Her spokesman, Bill McAllister, said in a statement that Palin told an assistant pastor she was sorry if the fire was connected to the "undeserved negative attention" the church has received since she became the vice presidential candidate Aug. 29.

"Whatever the motives of the arsonist, the governor has faith in the scriptural passage that what was intended for evil will in some way be used for good," McAllister said.

The 1,000-member evangelical church was the subject of intense scrutiny after Palin was named John McCain's running mate. Early in Palin's campaign, the church was criticized for promoting in a Sunday bulletin a Focus on the Family "Love Won Out Conference" in Anchorage. The conference promised to "help men and women dissatisfied with living homosexually understand that same-sex attractions can be overcome."

The fire was set at the entrance of the church and moved inward as a small group of women were working on crafts, Steele said. The group was alerted to the blaze by a fire alarm.

Outside temperatures were minus 20 as firefighters battled the blaze.

Steele said a multi-agency task force was being assembled to investigate the fire.

Wasilla, the governor's hometown, is 40 miles north of Anchorage.