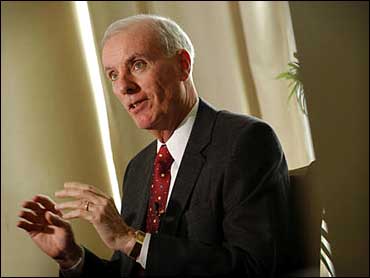 The head of the Columbia investigation expressed confidence Tuesday the panel will solve the mystery, as he and other members climbed into a pair of shuttle simulators to get a sense of what astronauts go through when they re-enter Earth's atmosphere.

"The professional team I have here has solved accidents with less evidence," retired Navy Adm. Harold Gehman Jr. said. "There's a lot of data and more data coming. We haven't even started debris analysis yet."

Gehman also said the panel will solve the mystery, saying they would stitch together photos, video, radar and other data into a "stereoscopic mosaic" of the shuttle's final minutes.

Thousands of pieces of debris have been recovered. All of it has come from either Louisiana or Texas, though no farther west than Fort Worth, Gehman said.

However, he said data suggest the shuttle began breaking up over the western United States and "it's possible there is something out there."

"We have reason to believe that we should keep looking west of Fort Worth," he said.

Gehman renewed NASA's request that amateurs turn over any photos and video of the shuttle as it flew over the West Coast early Feb. 1 before it broke apart over Texas. All seven astronauts aboard were killed.

Gehman spoke in advance of the first news conference by the entire nine-member board.

Five of the men on the board, appointed by NASA within hours of Columbia's fiery breakup Feb. 1, are active or retired military. Another is the director of the Federal Aviation Administration's accident investigation office, Steven Wallace. Only one works for NASA, Scott Hubbard, director of Ames Research Center in Mountain View, Calif.

The evidence released so far suggests Columbia's troubles began in the left wing. That is where a chunk of foam insulation struck 81 seconds after liftoff on Jan. 16, and that is where temperatures started surging and sensors began failing in the final eight minutes of flight.

Part of the left wing has been found.

The fragment includes a 2-foot piece of carbon-composite panel, a dense material that covered the leading edge of the wing, and a 1½-foot piece of the wing itself. Engineers are not yet certain where the piece fits.

It could be extremely important, given that the trouble apparently originated in the left wing during the final minutes before the flight broke up above Texas.

NASA originally said the piece was found west of Fort Worth. On Monday, the agency said satellite coordinates indicated it had actually been found near Corsicana, 66 miles southeast of Fort Worth.

The tests should produce "data to sink our teeth into," Hubbard said.

Earlier Tuesday, the commander of the international space station said he and his two crewmates have been kept up to date on the investigation.

"I guess the key question is the same question that all of you had is what happened?" said astronaut Kenneth Bowersox, the commander. "Once we know what happened, I'd start digging into why it happened. What in the system failed? Did we miss something? Did we just not know something? Was there an incorrect analysis?"

Before the news conference, all nine members of the investigation board crowded onto a pair of shuttle simulators to see what astronauts experience when they re-enter Earth's atmosphere. One was "flown" by John Young, a moonwalker who commanded Columbia on the very first shuttle flight in 1981, and the other by Air Force Lt. Col. Michael Bloomfield, who rocketed into orbit just last year.