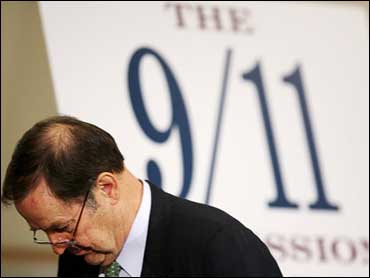 Time, money and ever-present terror threats have done little to close gaping holes in the nation's security system, the former Sept. 11 commission said Monday in accusing the government of failing to protect the country against another attack.

The panel cited disjointed airplane-passenger screening methods, pork-barrel security funding and other problems in saying the Bush administration and Congress had not moved quickly enough to enact the majority of its recommendations of July 2004.

"We're frustrated, all of us — frustrated at the lack of urgency in addressing these various problems," said Thomas Kean, a Republican and former New Jersey governor who was chairman of the commission.

The panel gave dismal grades to the federal government's efforts to shore up national security and prevent another terror attack.

Meeting for the last time since being appointed by Congress in 2002, commission members gave the government "more F's than A's" among the 41 grades measuring progress on security recommendations they issued last year.

View the report card (.pdf).
Specifically, the panel gave the government an "F" on homeland security spending for cities most at risk, on improving radio communication for emergency agencies and on airline passenger prescreening. They awarded only one "A" — actually an "A-" — for the administration's efforts to curb terrorist financing.

"We shouldn't need another wake-up call," Kean said. "We believe that the terrorists will strike again, so does every responsible expert that we have talked to. And if they do, and these reforms that might have prevented such an attack have not been implemented, what will our excuse be?"

Since the Attack on America, taxpayers have spent tens of billions of dollars to secure airports, harbors and cities and to better prepare firefighters and police, CBS News correspondent Bob Orr reports. But, with scores like an "F" for aviation security and an "D" for keeping weapons of mass destruction out of the hands of terrorists, the report isn't encouraging to citizens.

The official commission, tasked with investigating government missteps that led to the Sept. 11, 2001, attacks, disbanded after issuing its recommendations in July 2004. It has since been operating with private funds at the 9-11 Public Discourse Project to monitor government progress.

"We agree with their assessment," White House counselor Dan Bartlett said on CBS News' The Early Show on Monday.

He said the Bush administration had acted on some 70 of the commission's recommendations and that others were awaiting congressional action. "It's important that Congress act on those recommendations," he said.

"America is safer but yet not safe," White House spokesman Dan Bartlett added.

"We've gone three and a half years without another terrorist attack," Townsend said. "That's because we work hard at this every single day."

Since the commission's final report in July 2004, the government has enacted the centerpiece proposal to create a national intelligence director. But it has stalled on other ideas, including improving communication among emergency responders and shifting federal terrorism-fighting money so it goes to states based on risk level.

"There are so many competing priorities," said vice chairman Lee Hamilton, a former Democratic congressman from Indiana. We've got three wars going on: one in Afghanistan, one in Iraq and the war against terror. And it's awfully hard to keep people focused on something like this."

One specific failure that affects local responses to disasters small and large is communications. Just like on 9/11, first responders still have trouble getting on the same radio frequencies during emergencies, CBS' Drew Levinson reports.

"It's a scandal that police and firefighters in large cities still cannot talk to each other reliably when they are hit with a major crisis," Kean said.

Bartlett said the Bush administration had acted on some 70 of the commission's recommendations and that others were awaiting congressional action. "It's important that Congress act on those recommendations," he said.

In a statement released by the FBI, Assistant Director John Miller, he said: "In the past four years since September 11th, the pace of the FBI's change has been sweeping and continuous."

Hamilton, in a joint appearance with Kean on NBC's "Meet the Press" on Sunday, said, "We believe that another attack will occur. It's not a question of if. We are not as well-prepared as we should be."

National security adviser Stephen Hadley said President Bush is committed to putting in place most of the recommendations.

"It is kind of sad I think that in four years we don't seem to have been able to bring things up to snuff," said George Eichler, who was visiting Lower Manhattan from North Myrtle Beach, S.C.

Monica Gabrielle, whose husband died in the World Trade Center attacks, said: "Each citizen of the United States should be thoroughly concerned and start ... calling their elected officials and demanding answers as to why these things are not fixed." Hear Gabrielle's response to the report (audio).

Some members of the commission, whose recommendations now are promoted through a privately funded group known as the 9/11 Public Discourse Project, contended the government has been remiss by failing to act more quickly.

Kean and Hamilton urged Congress to pass spending bills that would allow police and fire to communicate across radio spectrums and to reallocate money so that Washington and New York, which have more people and symbolic landmarks, could receive more for terrorism defense.

Both bills have stalled in Congress, in part over the level of spending and turf fights over which states should get the most dollars.

Congress established the commission in 2002 to investigate government missteps that led to the attacks of Sept. 11, 2001. Nearly 3,000 people were killed when 19 Arab hijackers organized by al Qaeda flew airliners into New York City's World Trade Center and the Pentagon and caused a crash in the Pennsylvania countryside.

The panel's 567-page final report (web site), which became a national best seller, did not blame Mr. Bush or former President Clinton for missteps contributing to the attacks but did say they failed to make anti-terrorism a higher priority.