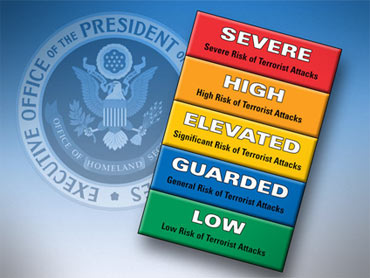 After a 60-day review of the nation's terror-alert system, a special task force is expected to recommend that the Obama administration keep color-coded alerts, but reduce the number of colors - or levels of risk.

There are currently five colors in the coded terrorism advisories, long derided by late night TV comics and portrayed by some Democrats as a tool for Bush administration political manipulation.

A bipartisan task force is expected to recommend reducing that to three colors, an official familiar with the review told The Associated Press. The official did not provide details of spoke on condition of anonymity because the results of the review have not publicly been released. The review period concludes Tuesday.

Under the current system, green, at the bottom, signals a low danger of attack; blue signals a general risk; yellow, a significant risk; orange, a high risk; and red, at the top, warns of a severe threat. It was put in place after the Sept. 11, 2001, terrorist attacks and was designed to help emergency responders get prepared. The nation has never been below the third threat level, yellow - an elevated or significant risk of terrorist attack.

Though some members of the task force argued for scrapping the system altogether, that move could prove complicated because many local governments have policies and procedures triggered when the federal government changes the alert level.

The task force also plans to recommend that the federal government hire people to manage the system and formalize the processes for communicating the messages to the public and first responders - something that has yet to be done, the official said.

The review determined the government's decisions for raising and lowering the terror alert levels need to be more transparent. When the alert level is raised, it should be reviewed after a certain period of time. And if it is determined that the level must remain where it is, a government official - such as the Homeland Security secretary - needs to explain why it's necessary to remain at a heightened state of alert.

The alert level has not been changed since 2006, when it was raised from yellow to red then lowered to orange in the aviation sector after terrorist plans to blow up jetliners en route to the U.S. from Britain were discovered.

Some of the recommendations are in line with suggestions made by former Homeland Security Secretary Michael Chertoff. In an interview with The Associated Press, Chertoff said he would recommend reducing the number of levels from five. "I think the lower levels are unlikely to be achieved in any reasonable period of time," Chertoff said.

The department also asked the public to e-mail comments on the alert system.

E-mails sent between July 14 and Aug. 4 were provided to The AP, but stripped of identifying information about those who commented.

In their comments, people likened the current system to the boy who cried wolf. Others criticized it for not following the natural color spectrum. And some wanted the system to be based on numbers as opposed to colors and to mirror the weather alerts familiar in communities across the country. Many people who commented associated the system with airports, exclusively.

And one person said the only benefit of the color-coded alert system is that it's provided a good source of entertainment, offering much fodder for comedians.

The 17-member task force included Democrats and Republicans, mayors, governors, police executives and public and private security experts. It is a balanced group clearly designed to not only evaluate the alert system but also to provide political cover from critics for any changes to the color-coded system.