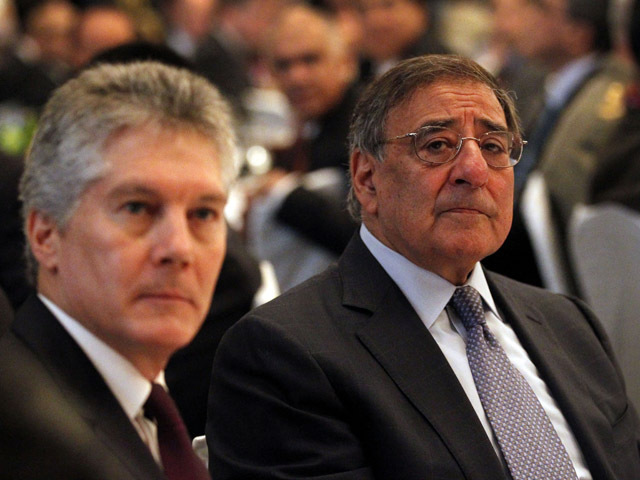 (AP) SINGAPORE - The Pentagon will shift more Navy warships to the Asia-Pacific region over the next several years and by 2020, about 60 percent of the fleet will be assigned there as part of a new strategy to increase U.S. presence in Asia, Defense Secretary Leon Panetta said Saturday.

While noting it may take years to complete the transition, Panetta assured his audience at a security conference in Singapore that U.S. budget problems and cutbacks would not get in the way of changes. He said the Defense Department has money in the five-year budget plan to meet those goals.

Speaking at the annual Shangri-La Dialogue conference, Panetta provided some of the first real details of the Pentagon's impending pivot to the Pacific.

"It will take years for these concepts, and many of the investments we are making, to be fully realized," Panetta said in remarks prepared for delivery at the conference. "But make no mistake, in a steady, deliberate and sustainable way, the United States military is rebalancing and brings enhanced capabilities to this vital region."

His promises, however, are likely to be met with skepticism from some nations that are aware of the coming budget cuts and have watched the U.S. send the bulk of its military might to Iraq and Afghanistan over the past decade. The boost in ship presence could increase tensions with China, where leaders have said they are unhappy with any larger U.S. presence in the Asia-Pacific region.

A key area of dispute is the South China Sea, which China claims almost entirely as its own. But Taiwan, Vietnam, Malaysia, Singapore, Brunei and the Philippines also have territorial claims there. The U.S. has pressed for a diplomatic solution to the disagreements but has also made it clear that freedom of navigation is critical in the region.

Overall, however, Panetta tamped down his criticism of China, choosing instead to issue broad warnings about the use of force in the South China Sea to block access. He praised China and Taiwan for working to improve their relationship across the Taiwan Strait.

He said he is looking forward to visiting China later this year, adding that he wants to see the U.S. and China deepen their military ties, including on counterdrug programs and humanitarian aid.

Panetta acknowledged that some see the increased presence of the U.S. in the region as a direct challenge to China. But he rejected that view, saying that a greater U.S. presence in the Asia-Pacific will benefit China and improve regional security.

Currently, the Navy has about 285 ships, with roughly half assigned to each coast, but that total may decline a bit as some ships are retired in the coming years and may not be replaced.

The current fleet includes 11 aircraft carriers, with six assigned to the Pacific. But those numbers are slated to go down later this year, dipping to 10 carriers, with five assigned to Pacific ports in San Diego, Washington state and Japan.

Panetta, however, said he intends to go back to having six carriers in the Pacific in the coming years. And he said the Pacific will also eventually host a majority of the Navy's cruisers, destroyers, submarines and littoral combat ships, which operate in close to shore.

Numbers, however, aren't everything. So Panetta assured the conference that the region will also get ships that have greater technological capabilities. He did not elaborate on what those might be, but he noted that the U.S. expects to deploy more enhanced and high-tech submarines and fighter aircraft, along with new electronic warfare and communications systems.

Panetta is on a nine-day trip across Asia, with planned stops in Vietnam and India.