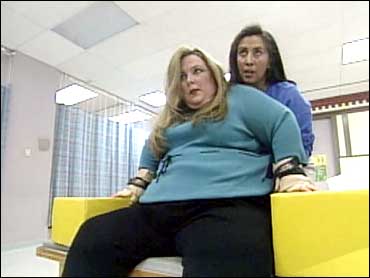 Tami Martin has spent the last six years in a wheelchair after her spine was damaged in a car crash. As CBS News correspondent Mark Strassmann reports, the problem was not the seat belt — she was wearing one — but how she was sitting, fully reclined in the passenger seat of her mom's van.

Nowadays, Martin, a paraplegic who hopes to one day walk again, sweats through grueling rehab.

"I had my seat belt on, reclined all the way," Martin says. "Taking a nap, sleeping, thinking I was safe, and the next thing I knew, I was in the hospital."

Martin's mother drove a minivan into a low-impact collision at less than 30 miles an hour. She wasn't hurt but Tami, reclined on the passenger side, seat belt latched, was crippled.

"So, right at my waist and my back, my spine was crushed. Originally they thought my spine had been severed," Martin says.

Tami was reclined in her seat and the shoulder belt hung off her, giving no protection at all. During the crash, her body slid under the waist belt. The full impact went to her stomach and lower back, as her upper half surged over the belt.

Angelo Patacca, Martin's lawyer, sued Ford, charging the automaker knew about the danger since 1984, but failed to warn consumers. Ford maintained no warning was necessary because that danger was commonly known.

On the eve of Martin's trial, Ford was airing a truck commercial featuring a cowboy in the passenger seat, with his seat reclined, feet on the dash and seat belt on.

When Martin's lawyers made an issue of the ad, Ford quickly pulled it off the air.

Then she made Ford a startling offer: She would return half her legal judgment if the carmaker would put a safety sticker in all its vehicles, warning passengers never to recline seats while the car's in motion.

Instead, Ford appealed the verdict.

Company officials declined to speak on camera. In a statement, a Ford spokesman called the accident "tragic," and said, "The airbag deployed as it should have, but the passenger was reclined in the seat with her feet resting on the dashboard. We believe the jury's finding that Ford did not adequately warn against riding in this position is incorrect. We expect this verdict will be reversed on appeal."

Carmakers generally market minivans, SUVs and trucks as traveling hotels, great for long trips. But in any make or model where seats recline, there's the same potential danger.

"I want car manufacturers to step up to the plate and warn people of the dangers," Martin says. "Because you can be a paraplegic, a quadriplegic or dead, if you recline your seat like I did, thinking you are comfortable."

Martin knows that will be an uphill struggle, just like her fight to walk again. Even before her accident, Martin was a seatbelt advocate, lobbying Florida lawmakers.

Ford was denied its motion for a new trial in the Martin case by a U.S. district judge. The company is now taking its case to the U.S. Circuit Court of Appeals.

Martin says she will take her crusade all the way to Congress if necessary.