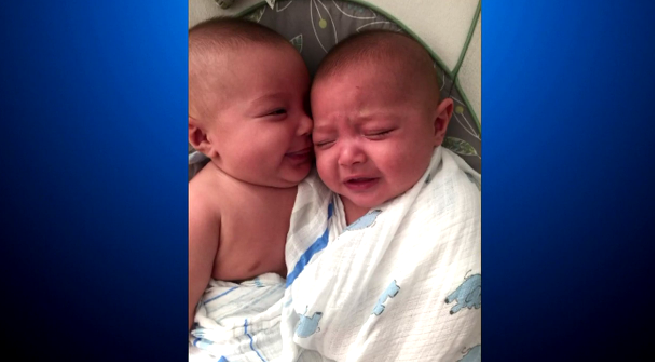 FIRESTONE, Colo. -- A Colorado couple is challenging people around the world to do a dozen acts of kindness. It's their way of honoring their identical twin sons who died before their first birthday.

Liz and Chris Kawulok say they are marking the loss of their adorable baby boys -- Luke and Liam -- with love on the anniversary of their deaths, which falls on Friday. They're asking the public to be a part of the twins' living legacy by wearing blue and posting 12 acts of kindness on social media using the hashtag #forLandL.

Life didn't come easy for the twins. Four months into Liz's pregnancy, doctors discovered a rare disease called Twin-to-Twin Transfusion Syndrome (TTTS). One twin was getting too much blood and the other received too little.

"We flew out to Seattle and had emergency surgery within 36 hours," Liz told CBS Denver.

The risky in utero procedure saved the babies, but they were born eight weeks early and received a devastating diagnosis. They had lissencephaly, a rare gene-linked disorder which means "smooth brain."

The boy's brains were malformed, growing without the normal folds in the cerebral cortex. Their parents were told the twins' life expectancy was two years. So they took the boys home and loved them for as long as they could.

"Every time they'd smile or they would coo or make a noise or giggle it was something we didn't know they would ever do, so it was really kind of a special moment every single time," Chris said.