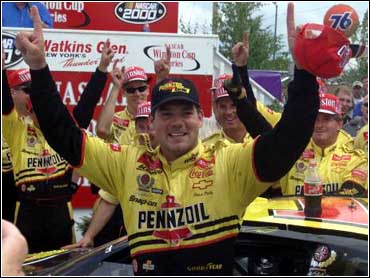 Jeff Gordon and Tony Stewart banged each other around on the track, then squared off in a war of words while Steve Park celebrated a victory both had hoped would be theirs.

"I'll slam you into the wall the first chance I get," Gordon shouted at Stewart after both emerged from their cars Sunday in the garage area at Watkins Glen International.

"Come over here," Stewart shouted back as two of NASCAR's greatest stars seemed to reach back to a bygone era of racing when drivers argued and even fought after disagreements on the track.

This one was over contact between their cars on just the second lap of the Global Crossing. They were side by side going through the s-turns, where there isn't enough room to pass.

One had to give way, and neither did. As a result, two of the race favorites were unable to challenge Park, who held off a determined bid by Mark Martin for the first victory of his Winston Cup career.

Moments later, the battered cars of Gordon and Stewart rolled up to their adjacent haulers. The helmets came off and the shouting began.

"I had you," Gordon said, his anger building and perhaps heightened because he was trying to extend his record of six straight victories on road courses and become the first in series history to win seven.

"You'd better practice what you preach," yelled Stewart, who ran Gordon into a guard rail. "You're always telling me to take it easy on the first lap. You think I did it on purpose?"

Park, who started 18th, drove his Chevrolet to a five-length victory over Martin's Ford.

The victory on the 2.45-mile road course in the Finger Lakes came in Park's 77th start. He best previous finish was fourth, earlier this season in Hampton, Ga.

After the race, he stopped in front of the grandstand, climbed on top of his car and raised his arms in triumph. Most of all, he was proud of how he won it, saying it was no fluke.

"We didn't win it on a fuel-mileage deal," said the 32-year-old driver from East Northport, N.Y. "We had to race our guts out against a guy who's known for winning a lot of races."

Park said he was moved by the loyalty of his fans.

"Through all the tough times, they sent me letters and came to my autograph sessions and kept telling me my first win would come soon," he said.

Park took the lead for the first time on the 31st o90 laps and stayed out front until pitting on lap 58. After regaining the lead under caution at the end of the 64th lap, Park held off Jeff Burton, who at one point closed within a car-length.

Burton, teammate Martin and Robby Gordon got into a brief, side-by-side battle, and Park was not seriously challenged again until the final five laps. Martin, one of the sport's great road racers, got within a length three times, but each time Park held on.

"We were catching up a little bit at a time, but we just didn't have enough," Martin said. "The last seven or eight laps we were a bit quicker than Steve but he was in front and that's the best place to be."

Park didn't make a mistake in the closing laps and was thrilled to win the way he did.

"To beat Jeff Burton and Mark Martin on a road course is an astounding feat," Park said.

Burton was third, followed by Robby Gordon in a Ford and the Pontiac of points leader Bobby Labonte.

The winner led twice for 54 laps and averaged 91.336 mph in a race slowed for 13 laps by five caution flags. There were eight lead changes among seven drivers.

Gordon wound up 23rd after he was penalized midway through the race for jumping a restart as he was trying to get back a lost lap. Stewart finished sixth.

Rusty Wallace, tied with Gordon in road-course victories, spun off the track on the 28th lap, and wound up 34th.

Park's victory was the third for Dale Earnhardt Inc. Dale Earnhardt Jr. won twice earlier this season for the team owned by his father. The seven-time Winston Cup champion, who drives for Richard Childress Racing, spun on the second lap and wound up 25th.

"They've been needing something to turn them around," Earnhardt said of Park's team. "Maybe this will be it."

Canadian road-racing ace Ron Fellows, who finished second last year, ost his chance to become the first non-regular in 27 years to win a Winston Cup race when he went out a third of the way through the event with an engine problem.