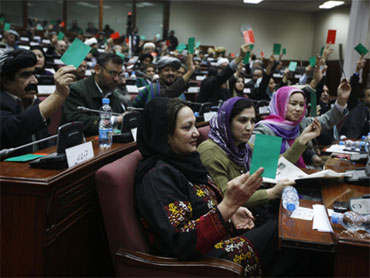 Afghanistan's parliament dealt a stinging rebuke to President Hamid Karzai on Saturday by rejecting 70 percent of his nominees for a new cabinet, including a regionally powerful warlord and the country's only female minister.

The laborious voting that took much of Saturday ended with the rejection of 17 of 24 nominees. The nominations, announced in mid-December, aimed to keep 12 current ministers in their posts for a second term. In part, that appeared aimed at satisfying U.S. and Western desires to keep trusted hands in place.

Among those Karzai wanted to keep was Water and Power Minister Ismail Khan. But that raised many hackles because Khan was a warlord in Herat province during the civil war of the 1990s and retains considerable local power; critics said keeping Khan indicated the extent to which Karzai appears to be beholden to regional power-brokers at the expense of the whole country's interests.

Many of his new nominees were also criticized as having been picked for reasons other than their competency.

"I think, unfortunately, that the criteria were either ethnicity or bribery or money," lawmaker Fawzia Kufi said before the voting.

The rejection of the women's affairs minister was an awkward blow to Karzai, who has pledged to place more women in high government posts in the traditionally male-dominated society.

Karzai has said he will make new nominations for the unfilled posts, but it is unclear when those names will be announced or a parliamentary vote held.

Karzai did not propose a nominee for foreign minister. He has asked incumbent Rangin Dadfar Spanta to stay in the post until after the Jan. 28 international conference in London that is to discuss the way forward for Afghanistan.

In another high-stakes political issue, the chief of Afghanistan's elections commission said Saturday that a parliamentary vote will be held in May despite widespread international concern that the country's electoral system needs serious reform.

Elections commission chief Ali Najafi told a news conference the national vote will be held May 22.

However, he said Afghanistan needs about $50 million from the international community to meet the election's estimated budget of $120 million. It was not clear whether the vote would or could be held if donor countries don't provide the money.

In the wake of last August's heavily disputed presidential election, many critics have pushed Karzai and his government to delay the parliamentary vote. Karzai has insisted the constitution, which specifies the elections be held by May, must be observed.

A U.S. Congressional delegation that met with Karzai in Kabul last week said it had warned the president that holding the election without first enacting substantive electoral reform could undermine support for U.S. aid to the country.

"We did not receive any official reaction from the international community that says that they are not supporting the election," Najafi said. "But in this regard, a paper was made by the United Nations which made certain recommendations and requested certain reforms."

He said reforming the electoral law was one of the issues raised by the international community, however, "it is not in our control, it is up to the parliament to approve the electoral law."

Najafi said security in the insurgency-ridden country would be a concern for the elections and the vote would not be held in areas where it could not be ensured. He suggested voters from those areas could travel elsewhere to cast votes. In the presidential election, that arrangement was made for voters in 10 districts.

The incident in Helmand was the second claim of civilian deaths in allied attacks in a week. The Afghan government said last week 10 people were killed, including eight schoolchildren, in a village in eastern Kunar province in a nighttime raid by international forces.

Karzai urged international forces to coordinate their operations better with both Afghan forces and local officials and admonished that "the fight against terrorism is not in our homes and in our villages," according to a statement from the president's office.

"The fight against terrorism should be conducted in those areas where they are getting their training," he said in a clear reference to Pakistan.