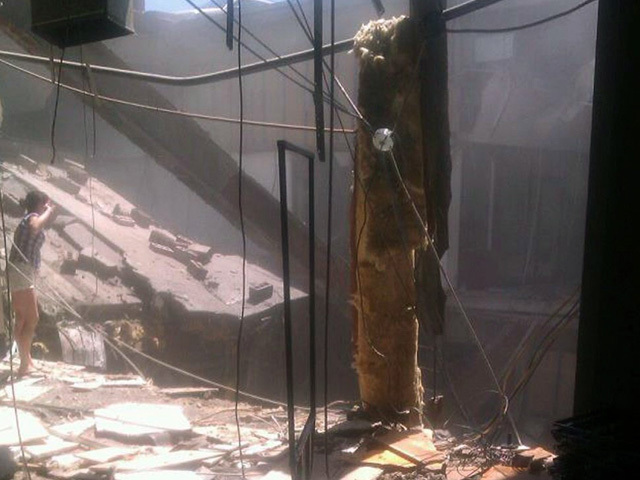 (AP) ELLIOT LAKE, Ontario - A roof partially collapsed at a busy shopping mall in Canada on Saturday, prompting an evacuation and a search for anyone who might have been injured.

A portion of the roof that serves as a parking area crumbled in the afternoon, exposing metal and concrete supports as Algo Centre Mall bustled with weekend shoppers.

Police spokeswoman Christine Ouimet said police did not yet know whether anyone has been injured or if there was anyone missing.

The collapse also triggered a gas leak and prompted emergency officials to shut off the mall's power.

Mayor Rick Hamilton declared a state of emergency soon after the collapse.

Joe Drazil, a Zellers store employee, said several cars appeared to have fallen through the gaping hole near some escalators.

"You can see the roof with the cars hanging inside," he said. "Everybody was cleared from the whole mall. After that, there was numerous police and emergency vehicles coming from all over."

The two-level mall in this northern Ontario community is approximately 200,000 square feet (18,580 sq. meters). It houses a grocery store, restaurants, a number of retail outlets, a hotel, and the constituency office for a member of the provincial parliament.