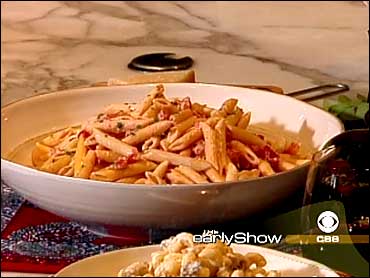 If you love Italian pasta sauces, but thought you could only get a good one out of a jar or at your favorite restaurant, think again.

She had three recipes for delicious sauces you can make at home, with little time or effort.

These sauces are great, because you can prepare them while you're cooking your pasta.

Ritchie held forth in The Early Show's "Five-Minute Cooking School" in the flagship store in Manhattan of specialty home furnishings retailer Williams-Sonoma.

She offered some basic tips on making pasta:

1. Be sure to use a big enough pot. You need five quarts of water to boil a pound of pasta. A pot with a removable insert for draining is best.

2. Salt your water once it has come to a rolling boil. Be generous here with your salt for the best flavor.

4. Toward the end of your cooking time for the pasta, scoop out a cup of the pasta's cooking liquid. This will be great to use if you need to thin your sauce.

Vodka in pasta sauces: According to cookbook author Arthur Schwartz, vodka was a relatively new spirit introduced to Italians in the early 1970s. To promote the consumption of vodka in Italy, vodka distillers provided restaurants with gizmos that kept both the vodka and vodka glasses chilled, and held recipe contests among Italian chefs. This dish was the rage in fashion-conscious Italian circles in the mid '70s. Ritchie says she never sees it anymore in Italy. But Americans are entranced by the idea, even though it is nothing more than a tomato cream sauce with hot pepper and a good dose of vodka, which, to be frank, is hardly detectable in the finished dish.

Pesto: The word comes from the Italian "pestare," a verb that means "to pound or crush." Pesto is traditionally made of crushed fresh basil leaves pounded with garlic, pecorino, either pine nuts or walnuts, and olive oil. It is generally attributed to the Liguria region of northern Italy, specifically the city of Genoa (Pesto alla Genovese). It has been known, in various forms, since Roman times, and probably originated in North Africa.

Penne alla Voka
Vodka may seem like an odd ingredient for an Italian dish, but this Florentine pasta has become a modern classic. When cooking with a strong liquor such as vodka or brandy, it is important to add it early in the cooking, so most of the alcohol and its harsh taste can evaporate, leaving behind only the flavor of the liquor. For a tomato-based sauce like this one, add the liquor after sautéing the garlic and allow it to reduce before putting the tomatoes in the pan.

When adding liquor to a pan, be sure to completely remove the pan from the stovetop to prevent possible flare-ups. Keep a lid handy in case you need to smother any flames.

Peel and seed the tomatoes, then cut them into small dice. If the tomatoes are very juicy, drain them for about 10 minutes in a colander. Set aside.

In a large fry pan over medium heat, warm the olive oil. Add the garlic and sauté until just starting to turn golden, 1 to 2 minutes. Remove the pan from the stovetop and add the vodka. Return the pan to medium heat and cook until reduced by half. Add the tomatoes, salt, black pepper and red pepper flakes and simmer, uncovered, for 10 minutes.

Meanwhile, bring a large pot of water to a boil over high heat. Generously salt the boiling water, add the pasta and cook until al dente (tender but firm to the bite), 10 to 12 minutes. Drain well and add the pasta to the fry pan.

Add the cream and cook, stirring, over medium heat until the pasta is well coated with the sauce, about 2 minutes. Taste and adjust the seasonings. Pour into a warmed large, shallow bowl. Add the parsley and toss briefly. Serve immediately. Serves 4.

You can pit olives quickly using the back of a large knife. Put the olives on a cutting board and lay the widest part of the blade on top, sharp edge facing away from you. Carefully roll the olives, pressing down on the blade. The olives should split, allowing you to remove the pits easily.

Make the pesto
Bring a large pot of water to a boil over high heat. In a food processor, combine the 1/2 cup olive oil, the garlic, olives and marjoram and pulse to combine. Using a rubber spatula, scrape down the sides of the bowl, and then pulse once or twice more to form a coarse sauce. Transfer the olive pesto to a large bowl.

Cook the pasta
Meanwhile, add the 2 tbs. Salt and the pasta to the boiling water. Cook, stirring occasionally to prevent sticking, until al dente, according to the package instructions. Drain, reserving about 1/2 cup of the cooking water. Add the pasta to the pesto along with the parsley and toss to combine. Add as much of the reserved cooking water as needed to loosen the sauce. Season with salt and pepper, drizzle with olive oil and serve. Serves 4.

For more recipes, go to Page 3.

The success of this simple, creamy sauce depends upon the cheese. Use a young, very mild gorgonzola, often called dolce. Aged gorgonzola is too strong for this sauce.

Make the sauce
Bring a large pot of water to a boil over high heat. In a large fry pan over medium-low heat, melt the butter. Stir in the gorgonzola, mashing it with a wooden spoon. Add the cream and bring to a gentle simmer, stirring occasionally. Reduce the heat to low and cook, stirring, until the sauce is thick enough to coat the back of a spoon, about 3 minutes. Do not allow the sauce to boil. Remove from the heat and stir in the parmigiano-reggiano and pepper.

Cook the pasta
Meanwhile, add the salt and pasta to the boiling water. Cook, stirring occasionally to prevent sticking, until al dente, according to the package instructions. Drain, reserving about 1/2 cup of the cooking water. Add the pasta to the sauce along with the walnuts and stir to combine. Add as much of the reserved cooking water as needed to loosen the sauce. Warm briefly over low heat to blend the flavors and serve. Serves 4.