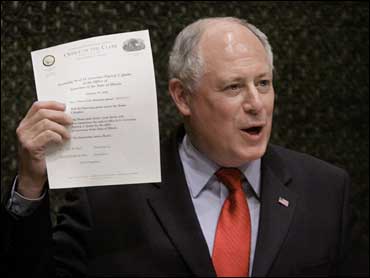 The Associated Press has estimated that Democrat Pat Quinn has won a narrow victory over Republican Bill Brady in the Illinois governor's race.

The AP says its analysis of uncounted absentee and other ballots showed that Brady cannot close the gap.

Quinn has claimed victory, stating that "the people of Illinois know I won the election." Brady is refusing to concede until all votes are counted.

"Votes need to be counted, there are good votes, and we're going to deal with all the data that's there and we'll then deal with the decision-making process as we gather data," he said according to the AP.

Quinn rose from lieutenant governor to governor when former Gov. Rod Blagojevich was ousted following his arrest on corruption charges. His victory would be a boost to Democrats in a tough midterm election year that saw President Obama's old Senate seat in Illinois go to Republican Mark Kirk.