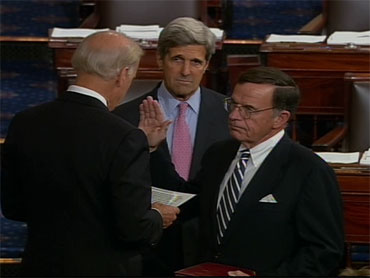 (CBS)
Vice President Joe Biden this afternoon presided over the swearing in of former Democratic Party chair Paul Kirk, who is taking over for Sen. Ted Kennedy until an election is held to decide who will serve the remainder of the late senator's term.

Kirk, a former aide and close friend of Kennedy, will serve until the January election.

Massachusetts Republicans had tried to delay the swearing in, suggesting that Gov. Deval Patrick had acted unconstitutionally in appointing Kirk so quickly, but they were rebuffed earlier today by a Massachusetts judge.

Kirk's entry into the Senate means that there are again 60 members in the body who caucus with the Democrats. That gives the Democrats a filibuster-proof majority that could prove crucial in their attempt to pass health care reform legislation.

Kirk is expected to vote as Kennedy, a fierce advocate for health care reform, would have. He has retained the senator's staff.

Senator John Kerry, now the senior senator from Massachusetts, looked on as Kirk was sworn in. At a press conference announcing Kirk's appointment, Kerry said he expected Kirk to be "a superb steward" for Kennedy's seat who will "hit the ground running."

Kirk, a 71-year-old attorney and Harvard law graduate who has worked as a pharmaceutical lobbyist in the past, lives on Cape Cod and has been the chair of the Board of Directors of the John F. Kennedy Library Foundation. His appointment was strongly backed by the Kennedy family.