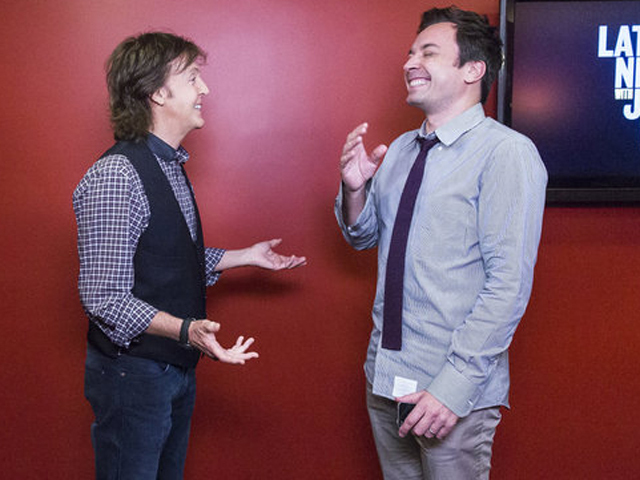 He may be a "Sir," but that doesn't mean he can't have any fun. On Monday's "Late Night with Jimmy Fallon," Sir Paul McCartney and Fallon did a bit backstage where they "bumped" into each another and "somehow" switched accents.

Check out the witty video above that has Fallon tackling McCartney's British/Liverpoolish signature speak, and McCartney attempting an American drawl while chewing some gum. In the end, our Yankee ways weren't for McCartney, who begged for his accent back, but Fallon was enjoying his newfound sophisticated way of saying unsophisticated things such as, "Here Comes Honey Boo Boo" and "let me see what you're twerking with."

McCartney later sat down with Fallon and went over a few old photos; when Fallon held up a black-and-white picture of McCartney photographing himself from several decades ago, the singer deadpanned, "Most people don't actually know that I invented the selfie." The Sir is certainly up on his youngster lingo. He then did what he does best, which is sing. His album "New" is due out Oct. 15.

Tell us: What did you think of McCartney's American accent? Do you plan to buy his new album?