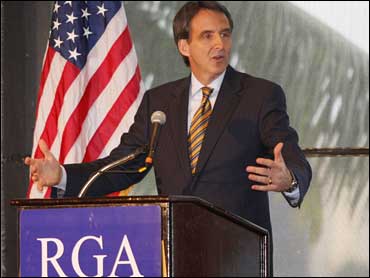 "At a minimum it's disruptive, number two, it's uninvited and number three, if people would like to hear his message they can, on a voluntary basis, go to YouTube or some other source and get it," he told reporters at the Minnesota state fair, according to CNN. "I don't think he needs to force it upon the nation's school children."

The president will speak about the importance of working hard and staying in school, according to the White House. He will not address policy or political issues. Some school districts, citing logistical concerns as the school year gets underway, are opting not to show the speech.

There has also been ideological opposition to the address, inflamed by an initial recommendation from the Department of Education that students write a letter to themselves on how they could help the president. That recommendation has since been removed and other language in the guidelines was also changed.

Pawlenty has been calling for conservatives to "stand up to President Obama" and has been speaking at key conservative gatherings in what some see as a signal that he is testing the waters for a possible run.

As CNN notes, another potential 2012 GOP presidential candidate, Mitt Romney, was less critical of the speech, saying that it is "appropriate" so long as Mr. Obama stays away from policy and politics.

Earlier Friday, White House spokesman Robert Gibbs derided critics of the speech, saying, "I think we've reached a little bit of the silly season when the president of the United States can't tell kids in school to study hard and stay in school."

Some Republicans have used outsize rhetoric to describe what they see as Mr. Obama's goals for the speech. Among them are Florida Republican Party chair Jim Greer, who alleged the president is seeking to "indoctrinate America's children to his socialist agenda."