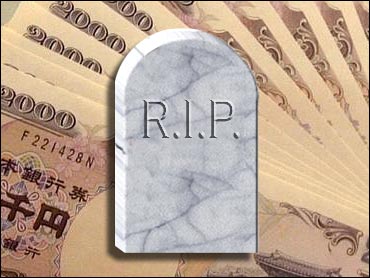 If it costs a lot to live in Japan, try dying: Cemetery plots on sale in Tokyo are priced at up to $86,800 each.

The city government began taking applications Wednesday for the 50 newly opened spots at Aoyama Cemetery - the first such sale in 43 years.

Tokyo is notorious as the world's most costly city, and through-the-roof real estate prices also register at cemeteries. Smaller plots at Aoyama start at $30,000, with a 40-square-foot lot going for $86,000.

"This is a rather reasonable price," city government official Chieko Sugisaki said. "This is a very famous cemetery so we expect a large number of people to apply."

Aoyama Cemetery, famed for its flowering cherry trees and proximity to glitzy neighborhoods, opened in 1874. More than 110,000 ashes have been interred there, including remains of famed politicians, writers, artists and actors.

The current sale is the first to the public since 1960. The government decided to resume sales because demand for spots in downtown Tokyo has spiked over the years, Sugisaki said.

Applicants must have lived continuously in Tokyo for more than three years and must have the ashes of the dead at hand to bury. City hall is accepting applications by mail through July 14.