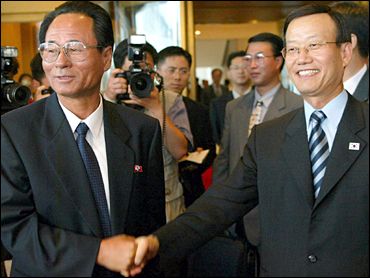 North Korea took two stunning steps away from decades of isolation on Friday when it announced with Tokyo that Japan's prime minister would visit and agreed with South Korea to breach the world's last Cold War frontier.

Japanese Prime Minister Junichiro Koizumi will travel to North Korea in September for a one-day visit that analysts said would mark a big step forward in improving ties and contribute to the easing of tensions in the region.

Also Friday, North and South Korea announced they have agreed to reconnect severed road and rail links. The agreement wrapped up three days of inter-Korean economic talks that ended in Seoul on Friday — the latest step toward reconciliation on the divided peninsula.

If plans go smoothly, the first road connection would be completed as early as November and the first railway before year's end.

Koizumi, who will be the first non-communist head of government to visit the reclusive country, said on Friday he would meet North Korean leader Kim Jong-il on September 17.

"Through direct talks, I hope that we will be able to find some sort of opportunity to resolve various problems between our two nations," he said. "Specifically, I want to seek the possibility of resumption of talks towards normalization."

CBS News Correspondent Bruce Dunning reports the trip is already being compared to Richard Nixon's visit to China 30 years ago.

North Korea and Japan have no diplomatic ties and relations between the two Asian neighbors have been rocky for years, haunted by bitter historical memories.

Opening road and rail links would be a significant breakthrough in relations between the two rivals, which are separated by the world's most heavily armed border. The 1950-53 Korean War between South Korea and the communist north ended in an armistice, not in a peace treaty.

But the Koreas have a history of reaching big agreements that later fall through when tensions flare. Plans to build a railway and a parallel road across the western sector of the border were originally included in an agreement reached at a historic inter-Korean summit in the summer of 2000.

South Korea completed work on its side of the border, but North Korea stopped construction early last year amid tension with the United States, Seoul's main ally, according to South Korean officials.

Talks on establishing ties between North Korea and Japan have been stalled for two years over a host of issues, including Pyongyang's demand for an apology for Japan's colonization of Korea and Tokyo's concern about missing Japanese it says were kidnapped by the North.

For Koizumi, whose popularity has been flagging at home, agreement from the North for a visit is a major diplomatic coup.

Analysts also said a successful trip would enhance his stature in the region at a time when Tokyo is worried about losing influence to China, one of North Korea's few friends.

Koizumi told reporters he had the strong support for the visit from President Bush, who has branded North Korea part of an "axis of evil." He said South Korean President Kim Dae-jung also backed the trip.

"I received strong support from both presidents," Koizumi said. "I hope to tackle this issue while maintaining close contact with both South Korea and the United States."

"It is expected that his visit to Pyongyang will mark an important occasion in settling the issues between the two nations and normalizing bilateral relations," the official Korean Central News Agency (KCNA) quoted a foreign ministry spokesman as saying.

Analysts said Koizumi's visit could be seen as part of a strategy by Pyongyang to improve relations with Japan to offset its difficult relationship with the United States.

The two Koreas will simultaneously restart work on reconnecting a railway and parallel road through the western sector of the border on Sept. 18, it said. They will aim to complete the railway by year's end and the road by the spring of 2003.

The Koreas also will simultaneously begin work in September on reconnecting a second railway and another road through the eastern sector of the border, the statement said.

The statement said that military officials will meet before Sept. 18 to work out details on implementing the agreement. South Korean officials said the timing of those talks was the last stumbling block in the negotiations.

Military cooperation is essential for the rail project, because the tracks would run through the mine-strewn 2½-mile-wide demilitarized zone that separates the two Koreas. Nearly 2 million troops are deployed on both sides of the border.