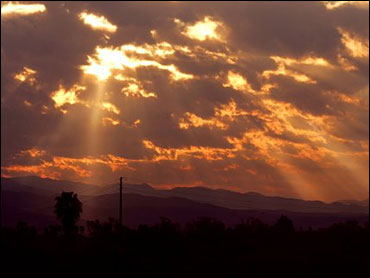 The peak of the next sunspot cycle is expected in late 2011 or mid-2012 — potentially affecting airline flights, communications satellites and electrical transmissions. But forecasters can't agree on how intense it will be.

A 12-member panel charged with forecasting the solar cycle said Wednesday it is evenly split over whether the peak will be 90 sunspots or 140 sunspots.

The government's Space Environment Center in Boulder, Colo., tracks space weather and forecasts its changes, which can affect millions of dollars worth of activities such as oil drilling, car navigation systems and astronauts.

Half of the specialists predicted a moderately strong cycle of 140 sunspots expected to peak in October 2011, while the rest called for a moderately weak cycle of 90 sunspots peaking in August 2012.

"We're hoping to achieve a consensus sometime in the next six to 12 months," said Douglas Biesecker, a space environment center scientist who is chairman of the forecast panel.

An average solar cycle ranges from 75 to 155 sunspots.

Making these predictions is important for many businesses, which have been asking for a forecast for nearly a year, Biesecker said.

Just like coastal residents want a hurricane forecast as early as possible, so do those affected by solar activity, said Joseph Kunches, chief of forecast and analysis at the center, which is part of the National Oceanic and Atmospheric Administration.

Daniel Baker, director of the Laboratory for Atmospheric and Space Physics at the University of Colorado-Boulder, noted that more than $200 billion of satellites in space can be affected by changes in solar radiation as the cycle rises and falls.

In addition, Baker said, other problems include: