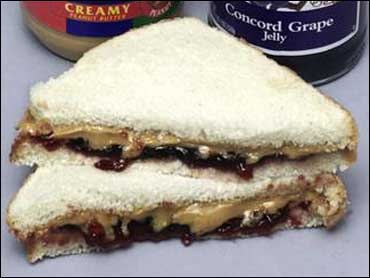 Peanut butter is a staple of most children's diets. But many parents debate whether or not to serve it, because they're not sure if it's healthy. Now, there's an answer.

The American Journal of Clinical Nutrition has published the results of a new study about low sugar foods, like peanut butter. They found these foods, when eaten in the morning, impact how much a child will eat later in the day.

The Early Show medical correspondent Dr. Emily Senay explains peanut butter can give children a full feeling, so they are less likely to snack on unhealthy foods before lunchtime.

Peanut butter also contains many other healthy vitamins and minerals such as niacin, folate, zinc and copper.

For those worried about peanut allergies, Senay says less than 1 percent of the U.S. population is affected. For those at risk, an allergic reaction to peanuts can be very serious. The FDA has just approved an at home peanut allergy test that you can use on your children. Unlike some allergies, it's often not something that children outgrow. And it's up to parents make sure that kids with peanut allergies get the nutrients peanut butter contains elsewhere.

The news on peanut butter doesn't mean children can eat as much as they want. Many nutritionist recommend giving a child two tablespoons a day, which equals two peanut butter sandwiches a week.

A peanut butter sandwich is fine to eat, says Senay, but she suggests buying bread labeled "whole grain." Whole grain crackers are another good option. You can also serve peanut butter to your child with pieces of apples and celery. This way, they are not only getting the benefits of the peanut butter, but the added bonus of fruits and vegetables.

Senay says brands of peanut butter sold in grocery stores are an OK choice. By law, for a product to be called peanut butter it has to consist of 90 percent peanuts. And many brands, in fact, contain closer to 92 percent to 93 percent of peanuts, so there is very little room left in the jar for other ingredients.