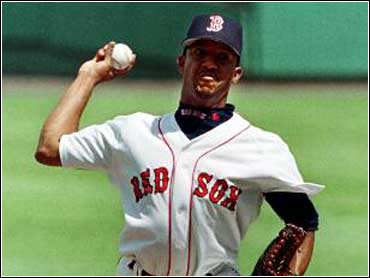 Fans filled Fenway Park wondering if Pedro Martinez was OK. They quickly got the answer they wanted

They roared when he struck out two batters in the first inning, cheered when he fanned the side in the second and applauded the Boston Red Sox's 9-0 win Saturday over the Texas Rangers.

"I can tell that the people are really worried," said Martinez, who pulled himself out of his previous start after four innings with a stiff right shoulder. "Even I was concerned the first two innings."

Martinez left after seven innings and Bryce Florie completed Boston's 10th shutout of the season, most in the AL. But Martinez isn't back at full strength.

"Not yet," he said. "I have to keep working because (his arm) got heavy on me in the innings that were a little longer."

There were plenty of those as Boston battered Matt Perisho (2-6) after a prolonged offensive cold spell. Jason Varitek drove in four runs and Lou Merloni sent in three as the Red Sox won their fourth straight and eighth in 11.

Merloni went 3-for-5 and is 14-for-24 (.583) in six games since being recalled from Triple-A Pawtucket. He started the season with Yokohama in Japan but had only 94 at bats in 42 games.

"I'm just having fun," Merloni said. "I was in Japan sitting on the bench, pinch hitting. That's not much fun. I just have good aim. hit a ball, look up and it's just dropping."

The Red Sox began the day one game out of the wild-card lead, held by Oakland, which played at Detroit later Saturday. They remained three games behind the New York Yankees in the AL East and need a healthy Martinez to have a legitimate playoff shot.

On Monday, he struck out four of Tampa Bay's first five batters but took himself out after the fourth with a stiff right shoulder. Boston won 7-3.

"I don't know if he feels 100 percent physically," catcher Varitek said. "But he was 100 percent efficient in his pitches."

Throwing mostly fastballs and changeups, Martinez struck out 10 for the 12th time in 22 starts. He didn't walk a batter for the fourth time in his last six starts, and didn't have one three-ball count while throwing just 89 pitches.

"If he didn't work up a sweat in the bullpen, he won't need a shower," Texas manager Johnny Oates said.

"There's going to be days when there's no light at the end of the tunnel," Oates said.

In his third season with the Red Sox, his 784 strikeouts tied Jim Lonborg for ninth place in club history.

Martinez struck out every Texas starter but Royce Clayton and allowed only one runner to reach second when Rusty Greer stole the base after singling in the first. Martinez retired 11 straight hitters before Scarborough Green beat out a grounder to first baseman Rico Brogna in the sixth. He then set down his last four hitters.

"I've faced him before in spring training. I've seen him on T.V.," Valdes said, "but being live was a lot different."

Unlike most of his starts, Martinez had plenty of support.

The Red Sox scored in the first on two walks and Troy O'Leary's RBI single. In the second, they loaded the bases with no outs but didn't score.

They added three runs on four hits in the third before knocking Perisho out in the fourth when they took a 9-0 lead with five runs.

The third-inning runs came on singles by Nomar Garciaparra and O'Leary, an RBI double by Merloni and a two-run single by Varitek.

In the fourth. Darren Lewis singled, stole second and scored on Carl Everett's double. Garciaparra was walked intentionally,and Darwin Cubillan came in to pitch. Merloni touched him for a two-run single, Bernard Gilkey walked and Varitek hit a two-run double.