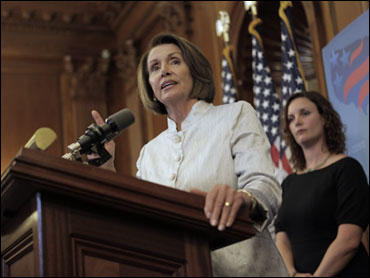 House Speaker Nancy Pelosi said Thursday that the anti-government rhetoric over President Barack Obama's health care reform effort is troubling because it reminds her of the violent debate over gay rights that roiled San Francisco in the 1970s.

Anyone voicing hateful or violent rhetoric, she told reporters, must take responsibility for the results.

"I have concerns about some of the language that is being used because I saw this myself in the late '70s in San Francisco," Pelosi said, suddenly speaking quietly. "This kind of rhetoric was very frightening" and created a climate in which violence took place, she said.

During a rambling confession, White was quoted as saying, "I saw the city as going kind of downhill." His lawyers argued that he was mentally ill at the time. White committed suicide in 1985.

Pelosi is part of a generation of California Democrats on whom the assassinations had a searing effect. A resident of San Francisco, Pelosi had been a Democratic activist for years and knew Milk and Moscone. At the time of their murders, she was serving as chairwoman of her party in the northern part of the state.

On Thursday, Pelosi was answering a question about whether the current vitriol concerned her. The questioner did not refer to the murders of Milk or Moscone, or the turmoil in San Francisco three decades ago. Pelosi referenced those events on her own and grew uncharacteristically emotional.

"I wish that we would all, again, curb our enthusiasm in some of the statements that are made," Pelosi said. Some of the people hearing the message "are not as balanced as the person making the statement might assume," she said.

"Our country is great because people can say what they think and they believe," she added. "But I also think that they have to take responsibility for any incitement that they may cause."

Pelosi's office did not immediately respond to a request for examples of contemporary statements that reminded the speaker of the rhetoric of 1970s San Francisco.

The public anger during health care town hall meetings in August spilled into the House last week when South Carolina Republican Joe Wilson shouted "You lie!" at Obama, the nation's first black president, during his speech. On a largely party-line vote, the House reprimanded Wilson.

The tone of the protests has sparked a debate over whether the criticism of Obama, the nation's first black president, is really about his race. Former President Jimmy Carter has said he thinks the vitriol is racially motivated, but Obama does not believe that, a White House spokesman said.

Asked about Pelosi's remarks Thursday, House Republican Leader John Boehner said he hasn't seen evidence that any of the public anger could lead to violence. And he took issue with Carter's remarks.

"I reject this resoundingly," Boehner told reporters, noting that he and other Republicans called Obama's election last year a defining moment for the nation. "The outrage that we see in America has nothing to do with race," Boehner said. "It has everything to do with the policies that he is promoting."