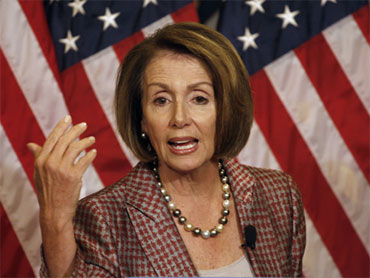 (AP Photo/Harry Hamburg)
House Speaker Nancy Pelosi offered few specifics today about compromises Democrats are making on health care reform. The speaker was crystal clear, however, on her thoughts about one possible compromise known as the public option "trigger."

The trigger is an idea supported by many fiscally conservative Blue Dog Democrats. The idea is that private insurance companies would get a window of time to get in shape, reduce costs and expand coverage. If the insurance companies fail to do so after a certain period of time, then the government could step in by creating a public insurance option to compete with private insurers. Moderates in both the House and Senate have favored, or are at least open to this idea, because it would give markets a chance to reach the goals Congress sets, but could, ultimately, keep the government out.

When asked today if the trigger was on the table as a possible compromise, Pelosi quickly shot the idea down. She said that members of her Caucus felt that "a trigger is an excuse for not doing anything." When asked if that was her personal view, the Speaker said she believes the bill is the trigger and waved off the idea.

"I don't even want to talk about a trigger," Pelosi said.

She also reiterated that the health care bill that comes to the House floor will have a public option despite the Senate Finance Committee moving forward without one.

Pelosi told members behind closed doors yesterday that she hopes to see a final House bill by the end of next week. Publicly, however, the Speaker continues to say they will move forward when they are ready, but it will be soon. Between now and then, Democratic leadership will continue their marathon of caucus meetings and small-group discussions in an effort to bring fiscally conservative Democrats who won't vote for a bill with a public option together with progressive Democrats who won't vote for a bill without one.

Meanwhile, Republican Leader John Boehner today continued to criticize Democratic efforts, saying Pelosi is committed to moving forward with a "big government approach that the American people have made very clear that they are opposed to."