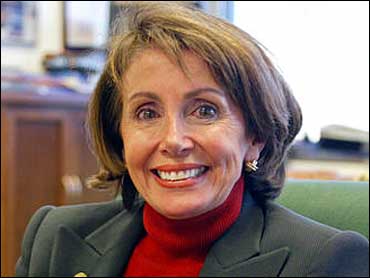 House Minority Leader Nancy Pelosi, D-Calif., inspired a lot of enthusiasm among progressives when she moved into a leadership position among Congressional Democrats three years ago. She was a solid liberal who had voted against authorizing President Bush to attack Iraq in 2002 and seemed to get the point that Democrats needed to become an opposition party. As minority leader, however, she's stumbled repeatedly on the issues and generally failed to function as a leader.

Pelosi is personally progressive on many issues. But she has not done much to develop a progressive image — or message — for Congressional Democrats. Rather, she has embraced the same caution that has undermined the party's appeal in the past two election cycles.

Pelosi was all over the place with regard to Rep. John Murtha's call for the development of an Iraq exit strategy. Even now, she's sort of for the Pennsylvania Democrat's proposal, but she's not moving the caucus in a coherent direction with regard to the war in particular or foreign policy in general.

Just watch Pelosi scramble away from discussions about presidential accountability because of her misread of public sentiment regarding censure and impeachment initiatives and you can tell that she is still buying into the discredited theory that Democrats will achieve meaningful power without standing for much of anything.

Sure, Bush's poll numbers are poor, and more than a few House Republicans are being fitted for prison uniforms. But if Pelosi thinks that the GOP grip on the House is going to be released without a fight, she is headed for a November result that parallels those of 2002 and 2004.

While many national Democrats continue to see something of value in Pelosi's leadership, her hometown paper, the San Francisco Bay Guardian, has lost faith.

The Guardian, one of the most progressive of the country's alternative weekly newspapers, issued its influential endorsements for California's June 6 primaries this week.

The widely-circulated paper gave warm endorsements to a number of House Democrats seeking reelection in Bay Area districts — including Barbara Lee, Lynn Woolsey and Pete Stark, all outspoken foes of the war and cosponsors of John Conyers' bill seeking to establish a select committee to make recommendations regarding impeachment. [Nine members of the California delegation are cosponsors of the Conyers resolution, but Pelosi has gone out of her way to distance herself from the proposal.]

The minority leader did not get any support, however.

Even though Pelosi does not face a primary challenge, the Bay Guardian's editors pointedly refused to endorse the minority leader.

Here's what they wrote:

If the Democrats retake the House, Rep. Nancy Pelosi will almost certainly become the first female Speaker, and that's something noteworthy. (And she'd be a far better Speaker than the incumbent.) Pelosi, however, has tried so hard to promote her own career that she's ignored her constituents and become too much of a moderate Democrat, late in opposing the war, weak on same-sex marriage, and obsessed with raising money. She's also responsible for privatizing the Presidio. Whatever happens this year, she needs a challenger next time around.

Reprinted with permission from The Nation