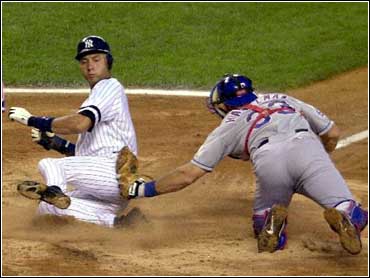 After a wild eight innings left the Rangers and Yankees tied at 9, a pair of potential double-play grounders - one turned and one not - decided a back-and-forth game.

Tino Martinez hit a game-winning single after Texas failed to turn a double play in the ninth, and New York won 10-9 Wednesday night after blowing a three-run lead in the eighth.

"This was a very big win for us," manager Joe Torre said. "To be able to pull it out was a big emotional lift. Hopefully we'll be able to carry it over until tomorrow."

Luis Polonia led off the ninth with a single against Tim Crabtree (2-7) and went to second on Jose Vizcaino's single. Jose Canseco hit into a fielder's choice, beating out a double play when Luis Alicea's throw pulled Frank Catalanotto off the bag at first.

"I thought for sure we were going to win that game," Alicea said. "But you can't give them that many outs. They'll make you pay."

Left-hander Mike Venafro came on, and Martinez grounded a single just inside the first-base bag. The Yankees poured out of the dugout in jubilation and the crowd that booed its team in the eighth inning celebrated.

"We should have won it earlier," Martinez said. "It was good to come back to win it for the bullpen and get them off the hook."

Mariano Rivera (7-3) escaped a shaky ninth for the win. With runners on first and second, second baseman Vizcaino started a neat double play, going to his knees to stop Gabe Kapler's grounder up the middle. Rivera retired Pedro Valdes to get out of the inning.

"Jose no question made the play of the night," Torre said. "I thought it was a hit and he turned it into a double play. That was huge."

Jorge Posada, who made a key error in Texas' five-run eighth, went 3-for-4 with a game-tying homer in the eighth and five RBIs.

The Yankees didn't get down either, despite stranding 14 runners in the first eight innings and blowing another late-inning lead.

"It's hard to blame the bullpen," Martinez said. "They've carried us the last five years. This year, they've struggled a bit, but we still have confidence in them."

The Yankees also kept up their dominance of the Rangers, winning for the 41st time in 54 games since losing Game 1 of the 1996 division series. The Yankees swept Texas out of the playoffs the past two seasons.

The Rangers likely won't be making a return trip to the postseason. Their 68th loss in 115 games already surpasses last year's total by one.

Texas gave up 17 hits and nine walks, and allowed 10 or more runs for the 22nd time this season, breaking the franchise record set in 1998.

The Yankees' relievers cost Clemens his seventh straight win for the second time in two starts. He left last Friday's game against Anaheim with an 8-3 lead in the ninth, but the Angels tied it on Mo Vaughn's three-run homer off Rivera.

Former Yankees outfielder Ricky Ledee erased a 7-4 lead in the eighth with a three-run shot off Mike Stanton.

"Today, I let me team down and I let Roger down," Stanton said. "There's really no excuse."

Errors by Jeff Nelson and Posada and a sacrifice by Royce Clayton put runners on second and third. Alicea then singled through a drawn-in infield to give Texas the 9-7 lead.

Kapler hit a two-run double and Bill Haselman and Rusty Greer had solo homers off Clemens.

Paul O'Neill, who left the game with a sore right hip, had a pair of RBI singles off Kenny Rogers. Posada added a sacrifice fly and an RBI double.

Rogers gave up six runs and 11 hits in five-plus innings.