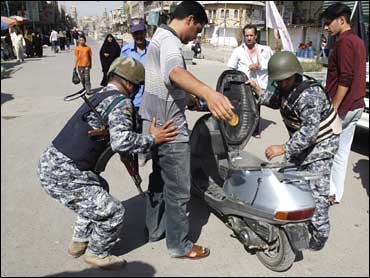 In another sign of U.S. struggles in Iraq, the target date for putting Iraqi authorities in charge of security in all 18 provinces has slipped yet again, to at least July.

The delay, noted in a Pentagon report to Congress on progress and problems in Iraq, highlights the difficulties in developing Iraqi police forces and the slow pace of economic and political progress in some areas.

It is the second time this year the target date for completing what is known as "Provincial Iraqi Control" has been pushed back. The Pentagon report submitted to Congress on Monday hinted at the possibility of further delays.

The intent is to give the provincial governments control over security in their area as a step toward lessening - and eventually ending - the U.S. security role.

Thus far seven of the 18 provinces have reverted to Iraqi control.

The process has gained relatively little attention in the broader debate in Washington about when and how to get the Iraqis ready to provide their own security so that U.S. forces can begin to leave. That may be in part because some details of the provincial transition process are classified secret.

Without mentioning a timetable, the No. 2 U.S. commander in Iraq, Lt. Gen. Ray Odierno, told reporters in Baghdad on Thursday that the transition to Iraqi security control is moving ahead at a deliberate pace.

"We go through this very carefully to ensure that we are able to maintain security for the Iraqi people," Odierno said. "We will not give back any of the hard fought gains because we tried to rush this process."

An independent commission that examined the issue of provincial Iraqi control this summer concluded in a report to Congress on Sept. 4 that the process is too convoluted and an impediment to the overall U.S. goals of speeding the transition to Iraqi control and supporting sovereignty.

"Our current policy of determining when a province may or may not be controlled by its own government reinforces the popular perception of the (U.S.-led) coalition as an occupation force," according to the commission, headed by retired Marine Gen. James Jones. "This may contribute to increased violence and instability."

The commission recommended that all 18 provinces return to Iraqi control immediately. U.S. forces would continue to operate in the areas they are now, in coordination with Iraqi authorities; Iraqi control would mean U.S. troops could transition to less combat-intense roles.

In an interview Wednesday, Jones said he and the other commissioners got the strong impression from Iraqi officials they met in Baghdad this summer that they want full provincial control without further delay.

"The whole process seems to be acting as more of a brake on progress than a help," Jones said. "If the Iraqi government is willing, I think we should be putting as much on them as possible. To have a sovereign government that doesn't control all of its provinces doesn't make a lot of sense to me."

In an Associated Press interview last week, Gen. David Petraeus, the top U.S. commander in Iraq, defended the transition process. It involves a series of detailed reviews and assessments by U.S. and Iraqi officials, culminating with input by Petraeus and the most senior Iraqi government leaders.

Though slow, it is helpful in sorting out problems that stand in the way of a smooth transition, he said.

"It forces people to come to grips with those issues," Petraeus said.

In January, President Bush announced his new strategy for stabilizing Iraq and his decision to send an additional 21,500 U.S. combat troops to Baghdad and to Anbar province. He, said, at the time, that the Iraqi government "plans to take responsibility for security in all of Iraq's provinces by November."

In June the Pentagon informed Congress that the target had slipped to "no later than" next March.

In this month's report, the Pentagon said its "current projection" was that all 18 provinces would move to Iraqi control "as early as" July; that would be eight months later than Mr. Bush's original projection.

"If, for example, violence worsened significantly in any of the provinces yet to transition to (Iraqi control) the likely dates for transition of those provinces would be reevaluated," the report said. It said the main reason for the delays so far is a "lack of capability in the Iraqi police services."

The Pentagon report cited a litany of problems with the police. For example, it said as few as 40 percent of those trained by coalition troops in recent years are still on the job. Also, due to combat loss, theft, attrition and poor maintenance, a "significant portion" of U.S.-issued equipment is now unusable.

Next in line for transition to Iraqi control is Karbala, a small south-central province, by the end of this month, according to the Pentagon report to Congress. It gave no further breakdown of the schedule.

The U.S. commander in northern Iraq, Army Maj. Gen. Benjamin Mixon, had recommended that Ninevah province shift to Iraqi control in August, but that date was pushed back to at least November. The province includes Mosul, the country's third largest city.

Last year, the relatively peaceful southern provinces of Muthanna, Dhi Qar and Najaf were returned to Iraqi security control. In April, Maysan province in the southeast was the fourth to convert.

In May the Kurdish regional government assumed security responsibility for the three provinces that make up the largely peaceful Kurdish region of northern Iraq: Dahuk, Irbil and Sulaimaniyah.