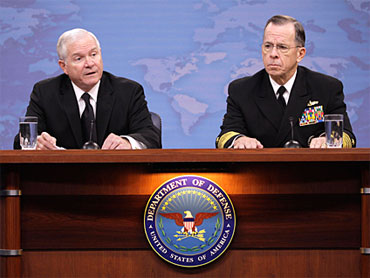 The Pentagon's study on gays in the military has determined that overturning the "don't ask, don't tell" ban on serving openly might cause some disruption at first but would not create widespread or long-lasting problems.

The study provides ammunition to congressional Democrats struggling to overturn the law. But even with the release of Tuesday's report, there is no indication they can overcome fierce Republican objections with just a few weeks left in this year's postelection congressional session.

Still, Defense Secretary Robert Gates and the chairman of the Joint Chiefs of Staff, Adm. Mike Mullen, said Congress should act quickly because of a recent effort by a federal judge to overturn the law.

Gates said the military needs time to prepare for such an adjustment, even though he said he didn't envision any changes to housing or other personnel policies. He said a sudden, court-issued mandate would significantly increase the risk of disruption.

"Given the present circumstances, those that choose not to act legislatively are rolling the dice that this policy will not be abruptly overturned by the courts," Gates told reporters.

"I am determined to see that if the law is repealed," he added, "the changes are implemented in such a way as to minimize any negative impact on the morale, cohesion and effectiveness of combat units that are deployed, or about to deploy to the front lines."

Mullen said the report offered "solid, defensible conclusions" and that the working group focused "rightly on those who would be most affected by a change in the law: our people."

"For the first time, [service] chiefs and I have more than just anecdotal evidence and hearsay to inform the advice we give our civilian leaders," he said.

The co-chairs of the study, Pentagon General Counsel Jeh Johnson and Army Gen. Carter Ham, wrote, "We are both convinced that our military can do this, even during this time of war."

Overall, the survey found that some two-thirds of troops don't care if the ban is lifted. Of the 30 percent who objected, most were members of combat units.

In fact, at least 40 percent of combat troops said the acceptance of gays serving openly would be a bad idea. That number climbs to 58 percent among Marines serving in combat roles.

"In my view, the concerns of combat troops as expressed in the survey do not present an insurmountable barrier to successful repeal of 'Don't Ask, Don't Tell,'" Gates said. "This can be done and should be done without posing a serious risk to military readiness. However, these findings do lead me to conclude that an abundance of care and preparation is required if we are to avoid a disruptive and potentially dangerous impact on the performance of those serving at the tip of the spear in America's wars."

A summary of the report says 69 percent of respondents believe they have already served alongside a gay person. Of those who believed that, 92 percent said their units were able to work together and 8 percent said the units functioned poorly as a result.

"We have a gay guy. He's big, he's mean and he kills lots of bad guys. No one cared that he was gay," the report quotes a member of the special operations force as saying.

President Obama released a statement calling on the Senate to pass repeal in the wake of the findings.

"Today's report confirms that a strong majority of our military men and women and their families-more than two thirds-are prepared to serve alongside Americans who are openly gay and lesbian," he said. "This report also confirms that, by every measure-from unit cohesion to recruitment and retention to family readiness-we can transition to a new policy in a responsible manner that ensures our military strength and national security."

The report predicts that many gay troops would still keep their sexual orientation quiet even after the ban was lifted. That discretion would probably be more common in the military than in the civilian world, the reports authors said.

Of the survey respondents who said they were gay, only 15 percent said they would want that known to everyone in their unit.

"I will just be me," one person said. "I will bring my family to family events. I will put family pictures on my desk. I am not going to go up to people and say, 'Hi there. I'm gay."'

Gates said he didn't think the Pentagon would have to rewrite its regulations on housing, benefits or fraternization.

"Existing policies can and should be applied equally to homosexuals as well as heterosexuals," he said, adding that the change could be addressed through increased training and education.

Though some troops suggested during the study that there should be separate bath and living facilities for gays, the report recommended against it because it would be a "logistical nightmare, expensive and impossible to administer."

Further, separate facilities would stigmatize gays and lesbians in the way that "separate but equal" facilities did to blacks before the 1960s, it said.

The report said commanders could address individual concerns on a case-by-case basis.

The survey is based on responses by some 115,000 troops and 44,200 military spouses to more than a half million questionnaires distributed last summer by an independent polling firm.

The House has already voted to overturn the law as part of a broader defense policy bill. But Senate Republicans have blocked the measure because they say not enough time has been allowed for debate on unrelated provisions in the bill.

Senate Majority Leader Harry Reid, D-Nev., has promised a vote on the matter by the end of the year, after hearings can be held this week on the Pentagon study. Still, some gay rights groups contend that Democratic leaders have done little to push for repeal before the new Congress takes over in January.

Reid spokesman Jim Manley said the majority leader is "very much committed to doing away with the ban this year" and that it was the GOP's fault for blocking the bill.