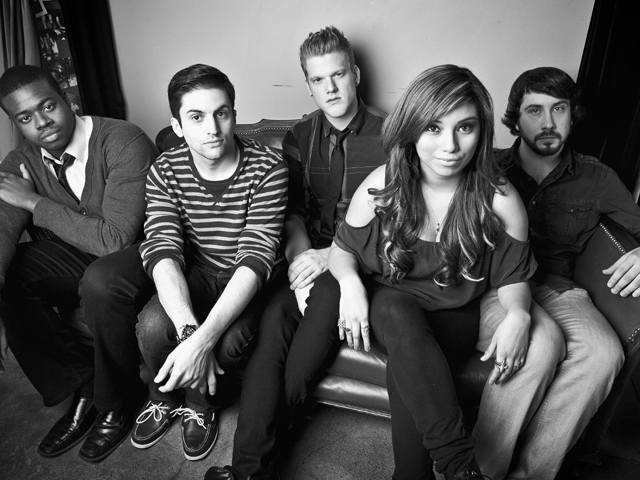 Pentatonix won over America's hearts on the a cappella singing competition TV series "The Sing-Off" last fall, and now the five-member group hopes to win over fans with its new debut EP, "PTX Volume 1."

"We knew at the beginning we wanted to do four covers and two originals," vocalist Avi Kaplan told CBSNews.com about the EP, which debuted in the Top 10 on iTunes last week. "We just kind of slowly started to pitch songs, and everybody would talk about the songs they want to do."

Nicki Minaj's "Starships" and Goyte's "Somebody That I Used to Know" are among the covers.

When Pentatonix performed at the NBA All-Star game in February, Minaj was among the other performers there.

"Chris Brown, Nicki Minaj and Lil Wayne all started standing up and dancing," vocalist Scott Hoying remembers. "Then Ne-Yo came up to us and said we were amazing ... Nicki Minaj thanked us."

The group members -- Kaplan, Hoying, beatboxer Kevin Olusola and vocalists Mitch Grassi and Kirstie Maldonado - all had a hand in creating the vocal arrangements on the new EP.

"When we're arranging, it is a very, very collaborative process ... we've done so many arrangements. We've done almost 30 arrangements in the year we've been together," said Kaplan. "We sit in a circle and go through every section of the song. Then we try something. If we don't like it we can scrap it and try something new."

Pentatonix comes on the scene as a cappella music continues to gain popularity in pop culture. There was Fox's hit series "Glee," then "The Sing-Off," which debuted in December 2009. Although the series won't be returning for another season, the a cappella trend continues on the big screen with the upcoming film "Pitch Perfect" about an all-girls singing group. The movie, starring Elizabeth Banks and Anna Kendrick, hits theaters this fall.

"It's been blowing up lately," Hoying said about a cappella music. "I think people are really understanding what it's all about and how cool it is, and how hard it is to do and to be good at it. "

With that, Pentatonix will be riding the a cappella wave. A fall tour is in the works, as are more releases. There's talk of a full-length album and a possible holiday set.

"I think we're at a time when people want to hear more authentic, real singing," added Hoying. "There's no auto-tune involved ... there are no lights and effects. It's just pure, authentic vocal performances, and I think that people are starting to appreciate that more."